Long time readers might remember the Hawthorne Suites shootout on Northwoods Boulevard in January of 2013. We have some legal outcomes to report with regard to that situation. Prosecution of those involved in the shooting was complicated by the fact that at least three of the four victims apparently did not want to prosecute the thugs who tried to kill them.

Let’s start with the worst of the suspects, Mark Laverd Swinton. He has been jailedd since he was arrested and charged with four counts Attempted Murder, two counts of Unlawful Possession of a Pistol and Possession of a Weapon During a Violent Crime for the Hawthorne Suites shootout. That has not stopped him from committing even more crimes while he was incarcerated.

Three of the Attempted Murder charges were dismissed. The fourth was reduced to 1st Degree Assault & Battery. The charges of Possession of a Weapon During a Violent Crime and one count of Unlawful Possession of a Pistol were dismissed by the 9th Circuit Solicitor. Swinton plead guilty to one count. Judge Kristi Lea Harrington sentenced him to 807 days time served on the assault and the same on the weapons possession charge.

While he was locked up Swinton was charged in May of 2013 with Throwing Bodily Fluids on a Detention Officer. He plead guilty to that charge on April 6th, 2015 and was sentenced to 10 years, suspended on 807 days time served and 4 years probation.

Swinton was charged with two more counts of throwing bodily fluids in May and August of 2014. Both of those charges were dismissed by the 9th Circuit Solicitor.

Swinton was charged in February 2015 with Indecent Exposure. That charge is pending and he was given a $10,000 bond.

Swinton also has pending charges of Contempt of Court, 3rd Degree Assault and Battery. He is still in the SACDC. 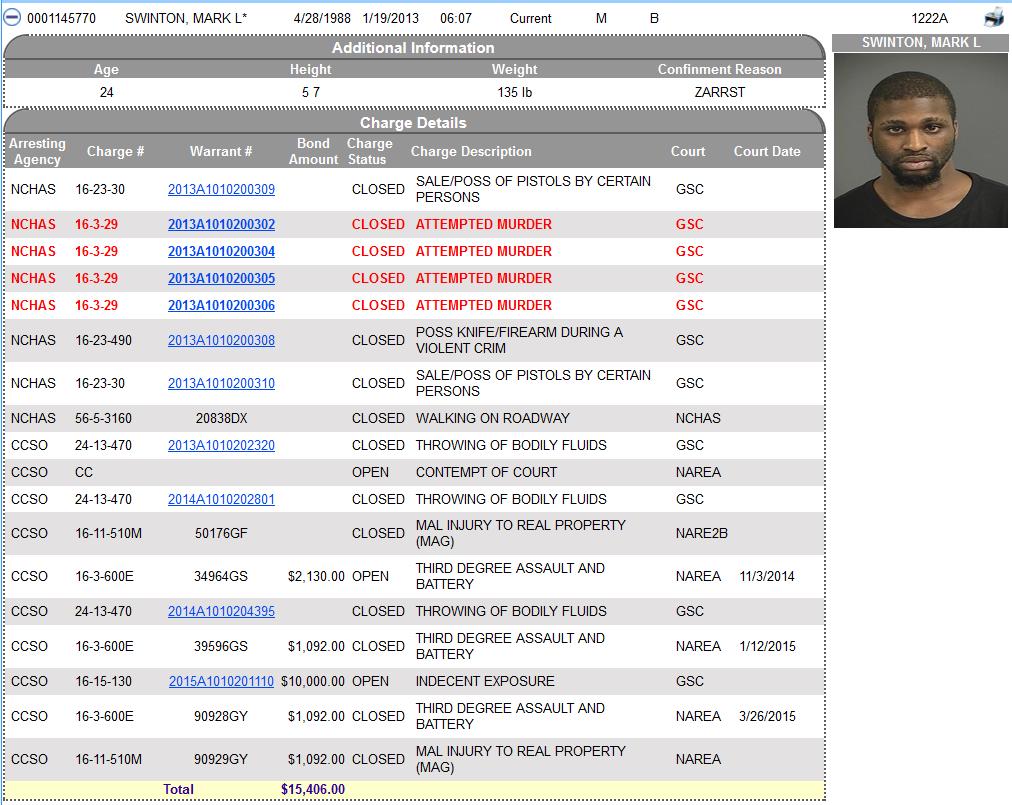 You can read the rest of Swinton’s extensive criminal history HERE. We know you citizens are glad to know he will be free on probation again very soon.

Davin Jerome Aiken was also charged with four counts of Attempted Murder in the Hawthorne Suites shootout. His charges disappeared from the public database a while back, but you can see them HERE. Strangely enough, even though his charges seem to have disappeared he was scheduled to enter a plea on those very charges on March 16th.

Aiken was the individual shot in broad daylight at Northwoods Mall in July of 2014. He was charged in March of 2015 with Unlawful Possession of a Pistol and Unlawful Carrying of a Pistol. The unlawful carrying charge is still pending and Aiken is free on a $50,000 bond. It appears law enforcement agreed to drop the unlawful possession charge. The record shows it was dismissed for “lack of prosecution” on April 1st. 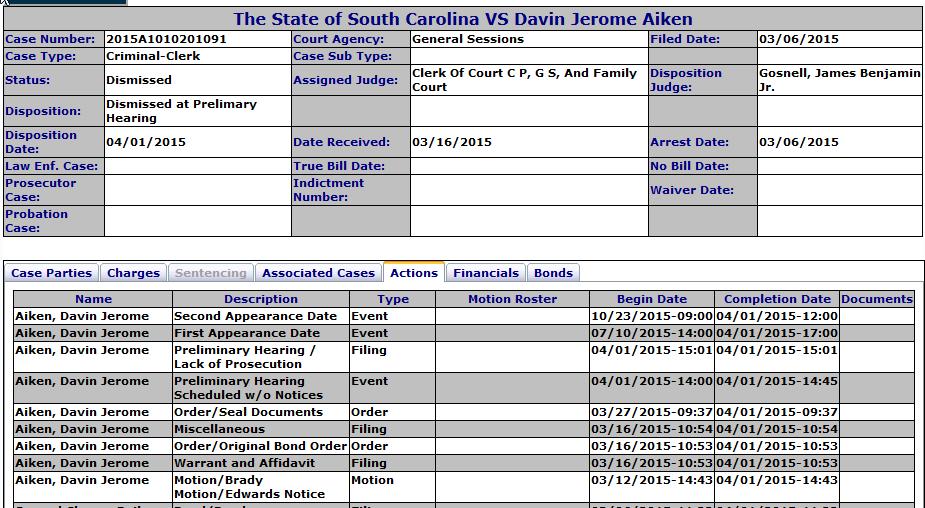 Aiken was previously affiliated with the Young Gunnas then splintered off to form the 40 Boiz. The thugs who shot Aiken at the mall were members of the Young Gunnas. At the time he was shot at Northwoods Mall we were told he was trying to leave the gang life and crime behind him. Uh-huh.

Devin Walker was also charged with four counts of Attempted Murder and one count of Unlawful Carrying of a Firearm in the Hawthorne Suites shootout. His charges have also disappeared from the public database. You can see them HERE. He was scheduled to enter a plea to those charges on March 18th.

Jaquez Brown was charged with four counts of Attempted Murder and one count of Unlawful Possession of a Firearm. He plead guilty to one reduced charge of 1st Degree Assault and Battery. The other three attempted murder charges were dismissed at the request of the victims. The firearm charge was dismissed when a co-defendant took responsibility for the gun. Judge Deadra Jefferson sentenced Brown on March 19th to a YOA term not to exceed 5 years, suspended in favor of 5 years probation. 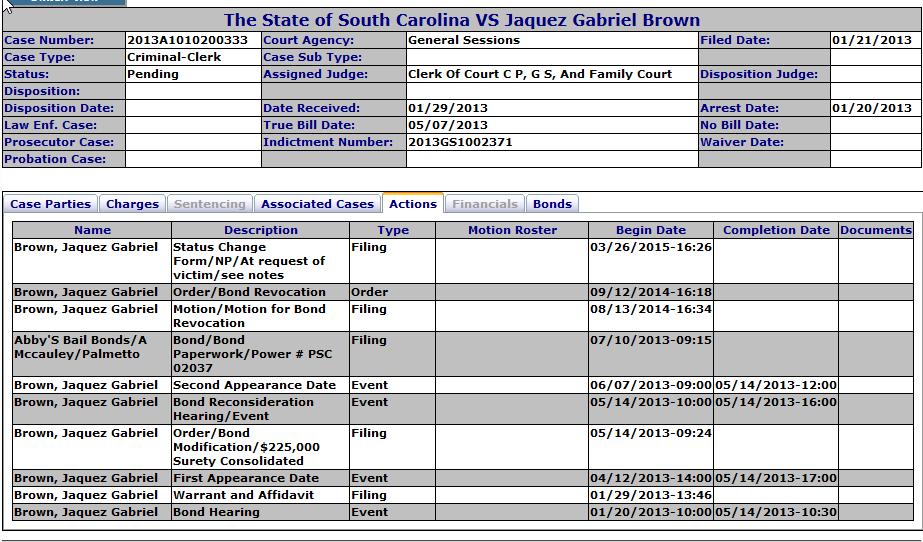 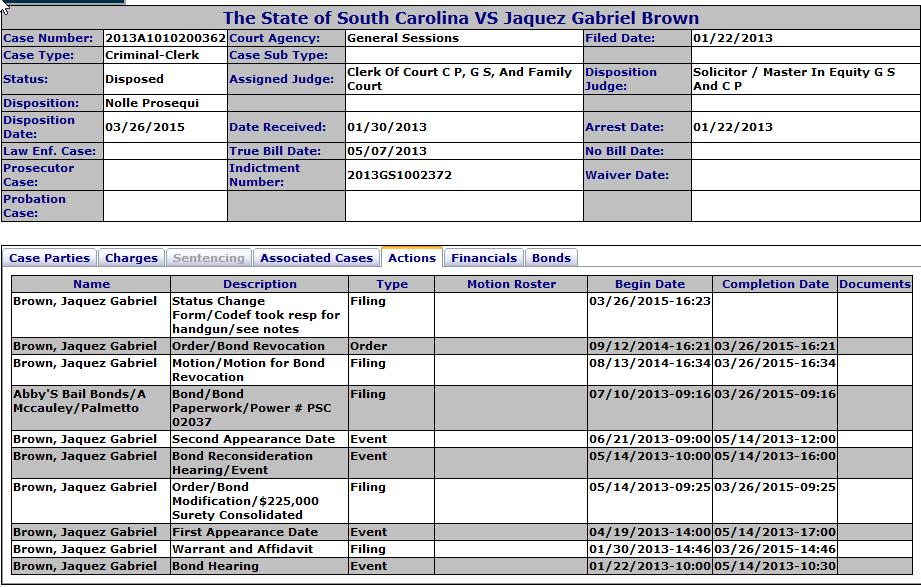 Brown was released from jail on April 3rd.

We are guessing Judge Deadra Jefferson and the 9th Circuit Solicitor forgot about the photos of Brown below previously published on CTL. 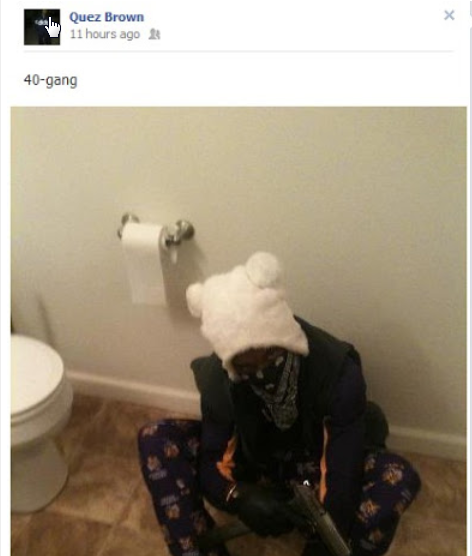 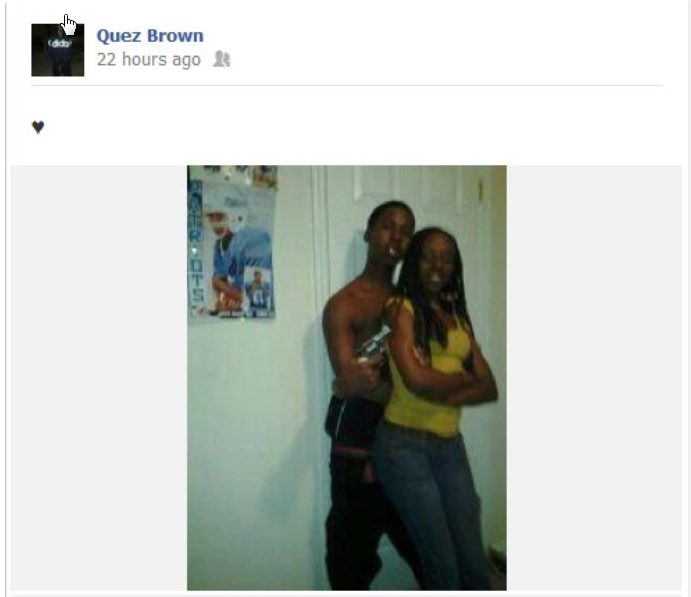 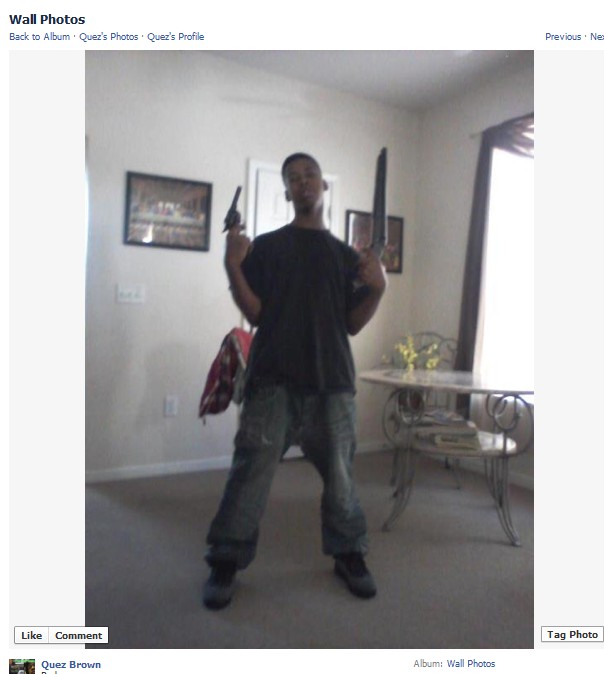 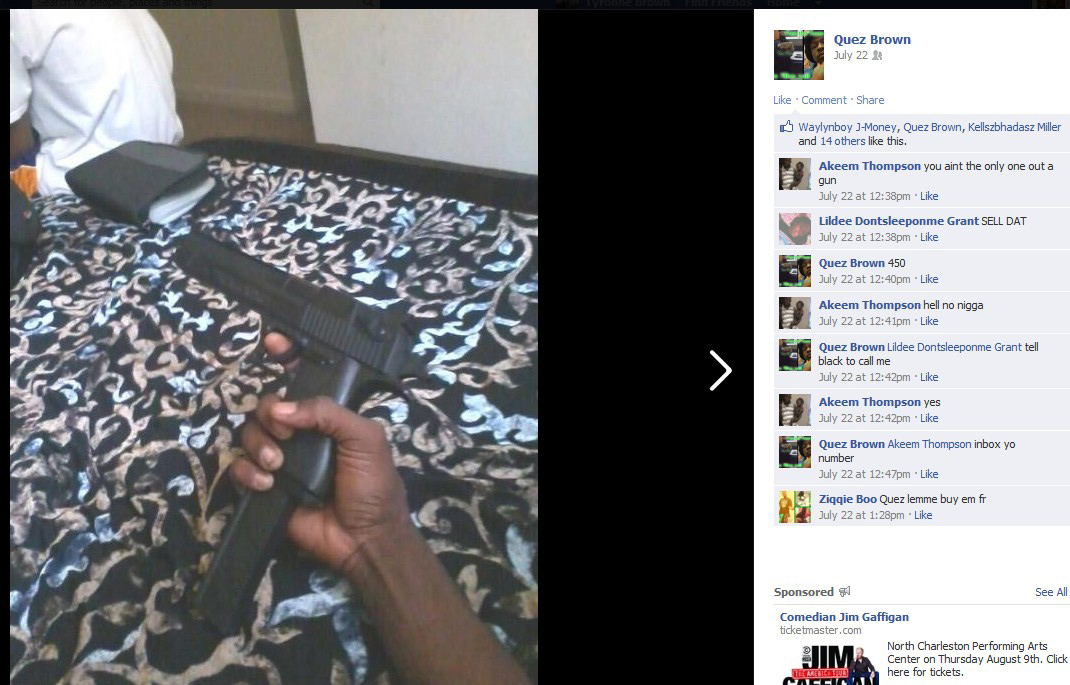 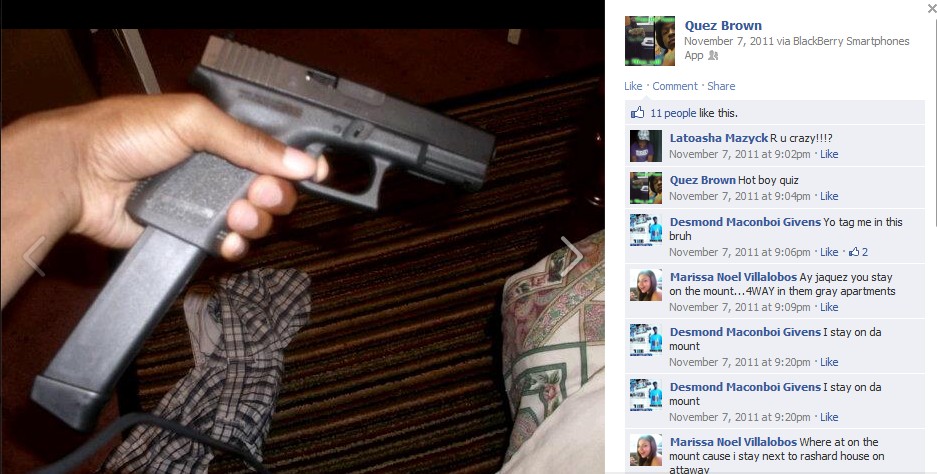 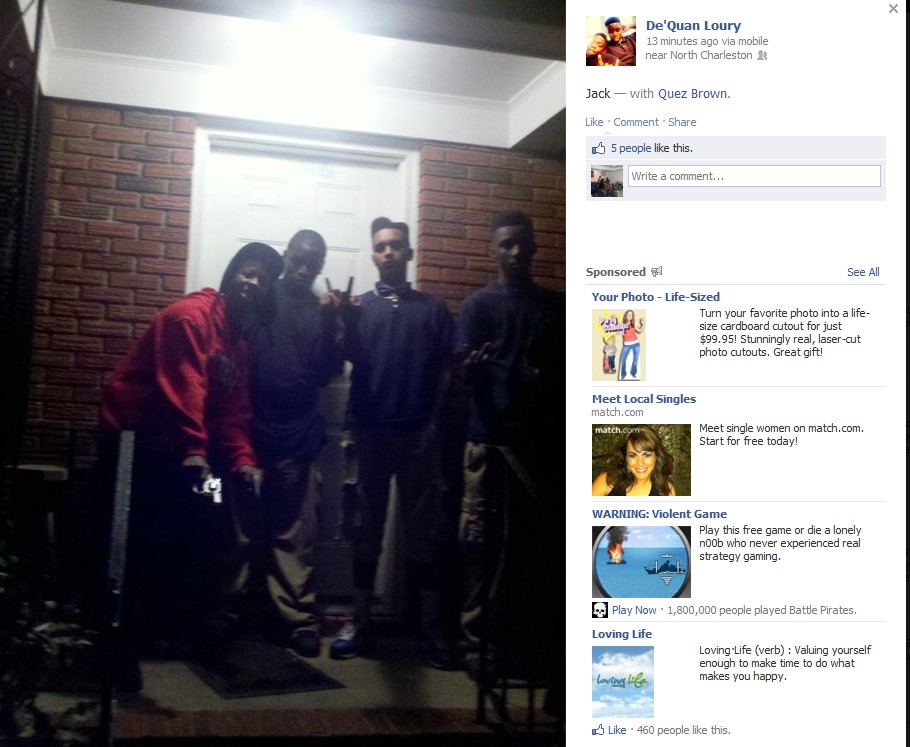 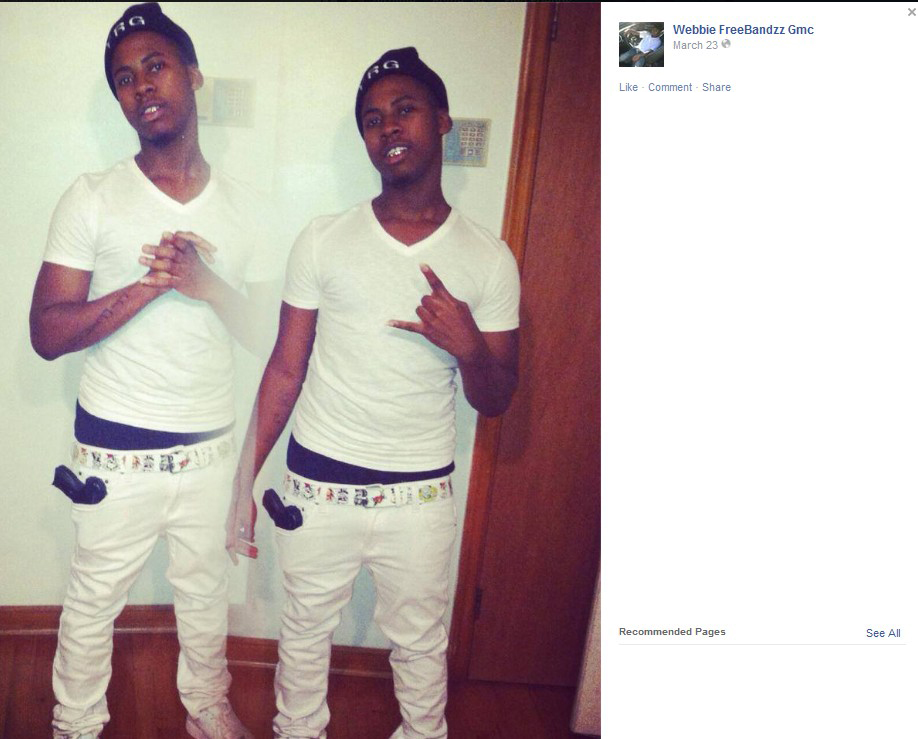 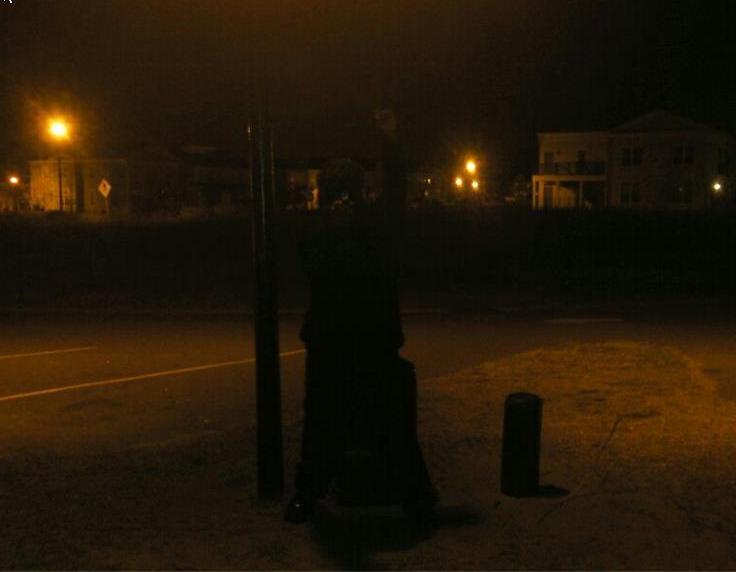 The prosecutor and the judge also chose to ignore these previously published threats against Brown’s co-defendants and the victims after he put their statements to police on his Facebook account. 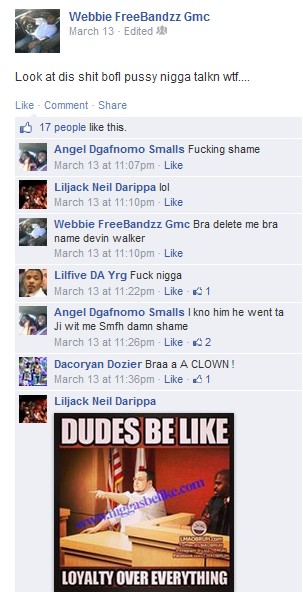 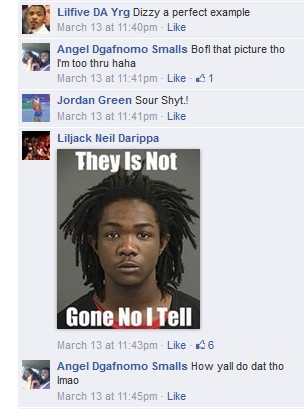 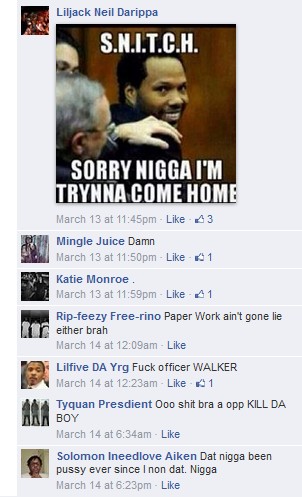 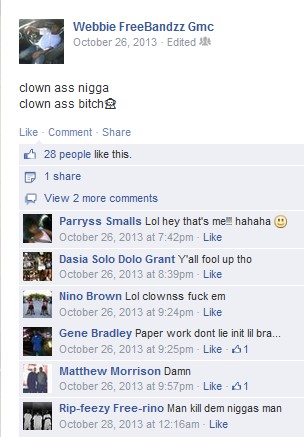 You can read more about Brown HERE.

We usually don’t have to criticize Judge Jefferson too much, but we think she definitely dropped the ball on this one. Brown, who frequently terrorized and shot up Horizon Village and was locked up several times on weapons charges as a juvenile, also claims membership in the 40 Boiz gang. We suspect we will be seeing him again before too long.

Every one charged in this incident, with the exception of Swinton, are free to roam the streets. Once Mark Laverd “Psycho” Swinton makes bond, he will be out, too.