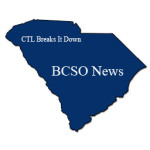 Why are we posting a BCSO roundup? Keep reading.

Over the past few months we have done a few features on the problems at the Berkeley County Sheriff’s Office. Most have had to do with administrative incompetence by the current Sheriff and alleged cover-ups of criminal activity, all of which have only served to place line employees in danger due to personnel shortages.

Two hours to respond to a domestic assault in progress? Really?!? At least the deputy apologized when he finally did get there. Only three detention officers manning the jail at a time? No danger there!

Not to mention the knowledge that criminal activity within the agency will not be prosecuted. We just checked yet again and there are still no charges on the nurse who is said to have provided narcotics and blow jobs to inmates at the Hill-Finklea Detention Center. How’s that SLED investigation working out for you citizens?

Oh, wait just a second! The SLED investigator whom we are told was assigned to do most of those investigations involving BCSO was recently fired due to allegations of dishonesty and inserting a made-up confession into a child abuse case file. Maybe now we are starting to get an inkling as to why those BCSO investigations have gone nowhere.

Then there is the complete lack of reporting from any of the local “news” sources with regard to problems at BCSO. We have been told by sources from two of those organizations that Berkeley County government in general, and the sheriff’s department in particular, are highly effective at delaying responses to requests for certain information and they like to tie up FOIA requests for as long as possible. They do this knowing the news keeps moving and sooner or later the media will move on to another big story and forget all about BCSO.

Combine all that with recent emails we have received, and a number of postings on social media wherein citizens of Berkeley County are complaining about their election signs being stolen from their property. You can probably guess those signs don’t have the name “Wayne Dewitt” on them. It seems the supporters of the current regime have no problem whatsoever when it comes to resorting to theft and (increased) deception in order to keep their man in office. What does that tell you?

In case you wondering if this is only happening to the average hard working citizens in Berkeley County, let us assure you it is not. We have seen comments from several police officers mentioning the fact their election signs for candidates other than Dewitt were stolen from their yards.

Let all your friends know we have an open call for photos and video showing anyone stealing election signs in Berkeley County. You probably couldn’t get the regular “news” folks to run them, but we will. After all, criminal activity is criminal activity. Right?

We also received a few requests from folks asking us to put up links to the recent stories we have done on BCSO. We have resisted that request for a couple of weeks because we don’t live or vote in Berkeley County and we don’t have a dog in the fight. We just report the information we receive. Things changed this weekend, though. In light of this new information about thievery we have finally decided to acquiesce to those requests for a BCSO roundup. Here they are, newest to oldest.

Another Injury at BCSO

BCSO - Time For a Change

Who Gets the Blame?

The Silence is Deafening

Things That Make You Go “Hmmm”

No Rush to Report

The Stuff We Hate to Write

It is up to the citizens of Berkeley County to decide their own fate. This will be an interesting election to watch.

Owner and Author of Charleston Thug Life. Chief started this website back in March of 2012 to shine the light on the Criminals of Charleston.