Terrance Singleton is our first contestant for Father of the Year 2015. We already have two contestants for Mother of the Year (here and here). It seems he was busy trafficking cocaine and distributing marijuana Saturday when he was stopped by police. Singleton fled the stop with his two children in the car. When he was finally rounded up, officers located two ounces of cocaine and 3 ounces of marijuana concealed in a baby formula can.

Singleton, of 2900 N. Oakridge Circle, was charged with PWID Marijuana, Trafficking Cocaine, Reckless Driving and two counts of Unlawful Conduct Toward a Child. His total bond on those charges was set at $160,445.

We know regular readers will not be shocked to discover Singleton was free on bond on drug charges when he was arrested Saturday.

In February of 2013 Singleton was charged with Distribution of Cocaine. He was freed on a $20,000 bond. That charge is still pending.

While free on the bond from the February 2013 charge, Singleton was arrested again on September 11th, 2013. He was charged with Possession of Cocaine and Possession of Meth/Crack. He was again released, this time on a total bond of $20,000. These charges are still pending.

Sixteen days later, on September 27th, Singleton was arrested again and charged with Possession of Cocaine. He was given another $20,000 bond and released. This charge is still pending.

The 9th Circuit Solicitor tried to have the bond on the cocaine distribution charge revoked in February of 2014, but a judge denied that request.

So, Singleton was free on bonds totaling $60,000 when he fled police with his two kids in the car this past Saturday. Let’s look at the remainder of his criminal history.

Unlawful Possession of a Pistol by a Person Under 21 - Dismissed by the 9th Circuit Solicitor.

Three months after being sentenced to probation on the gun charge, Singleton was arrested again and charged with Unlawful Carrying of a Pistol. He plead guilty in December of 2008 and was sentenced to 1 year by Judge Roger Young. Given the fact that Singleton served five months in jail before pleading guilty, this was basically a sentence of “time served”.

To the credit of Probation and Parole (something they haven’t been getting much of lately), Singleton was charged with a probation violation for the above arrest. Judge Young revoked his probation in January of 2009. 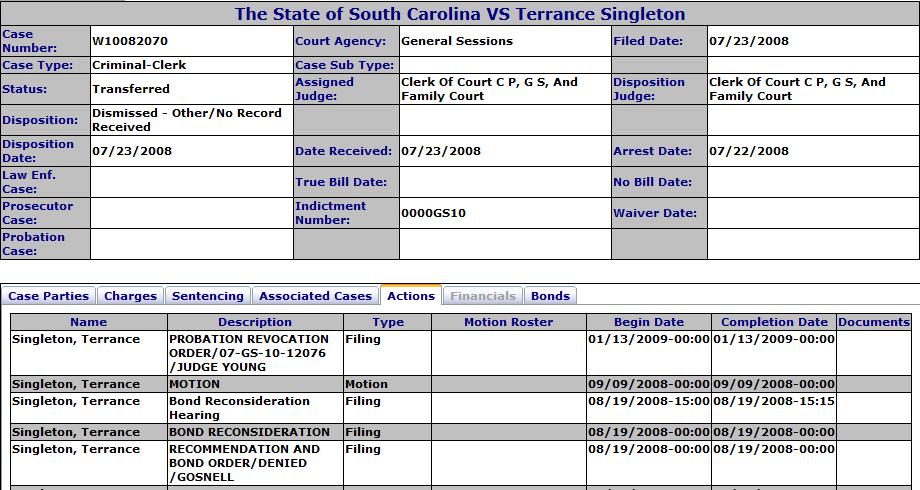 Want to be it won’t be long before Singleton gets a judge to reduce his bond and he’s out slinging dope again?

Based on the charges in this analysis and the one we posted this morning, our new 9th Circuit gun charge tally is: