A Variety of Cases

We have a variety of cases to discuss this evening. First up is the armed robbery of the CVS Pharmacy at Dorchester and Ashley Phosphate. Yes, it was robbed…..again. This time 25 year old Charles Eugene Toole, of Indigo Fields,  made off with a bunch of pills. Police tracked him and cuffed and stuff him. No mug shot is currently available. Toole has no prior general sessions court record. He decided to go big his first time out of the gate.

Daewon Warren, of 229 Sprucewood Drive in Summerville and 940 E. 220th Street in the Bronx, NY, was charged with Trafficking in Persons Under 18 Years of Age. No bond has been set yet.

Warren likes to get his money by making other people work for it. If those other people happen to be underage females he can intimidate and beat, all the better.

Warren was also arrested in August of 2014 on a charge of Unlawful Possession of a Firearm. He plead guilty and was sentenced in December by Judge Roger Young to 39 days time served.

We learned via news reports that Lance Laprince Grayson was the 35 year old assisted into Dead Right There status with the judicious use of some lead projectiles at Avenue of the Oaks on Ladson Road this past Monday evening. After looking at Grayson’s criminal history we can’t say if his murder might have been payback for previous assaultive behavior or resulted from his proclivity to sell fake drugs. Once again, the self-cleaning feature of the street did the job solicitors and judges could not or would not do. 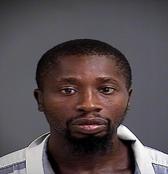 1st Degree Burglary - Dismissed at request of the victim.

Distribution of Crack - Dismissed by the 9th Circuit Solicitor with a note indicating their belief the officer conducted an illegal search.

Distribution of Crack Near a School - Same as above.

Possession of a Stolen Motor Vehicle - Dismissed by the 9th Circuit Solicitor because Grayson just happened to be there and din’t do nuffin.

Possession of Cocaine - Plead guilty. Sentenced by Judge Diane Goodstein to a YOA term not to exceed six years and shock incarceration.

Two counts of Possession of Cocaine - Pled guilty. Sentenced by Judge Thomas “Felon’s Friend” Hughston to 1 year suspended in favor of 2 years probation. Because, you know, those two previous probation sentences kept him right in line.

Two counts of Possession of Crack - Same as above.

But, hey, at least he got credit for time served for other offense in 2004. 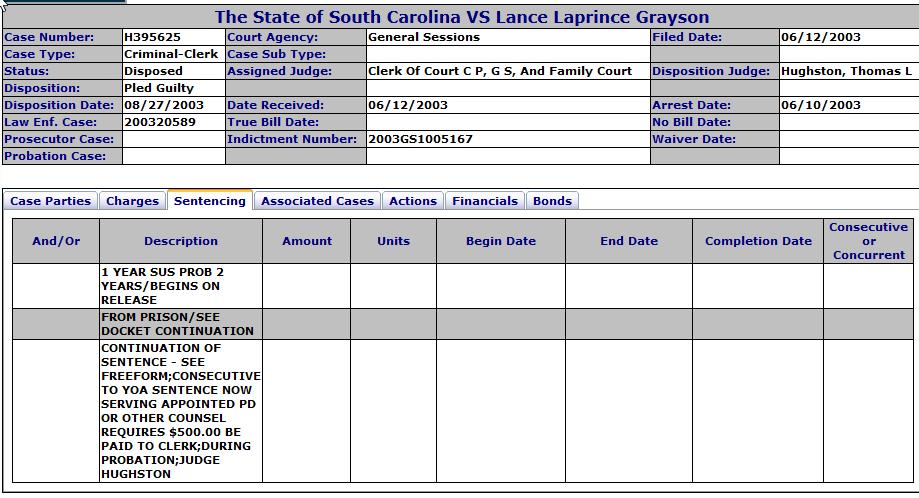 Possession of a Stolen Motor Vehicle - Plead guilty. Sentenced by Judge Edward Miller to 5 years, suspended in favor of 5 years probation. Because, you know, the fourth time is a charm. 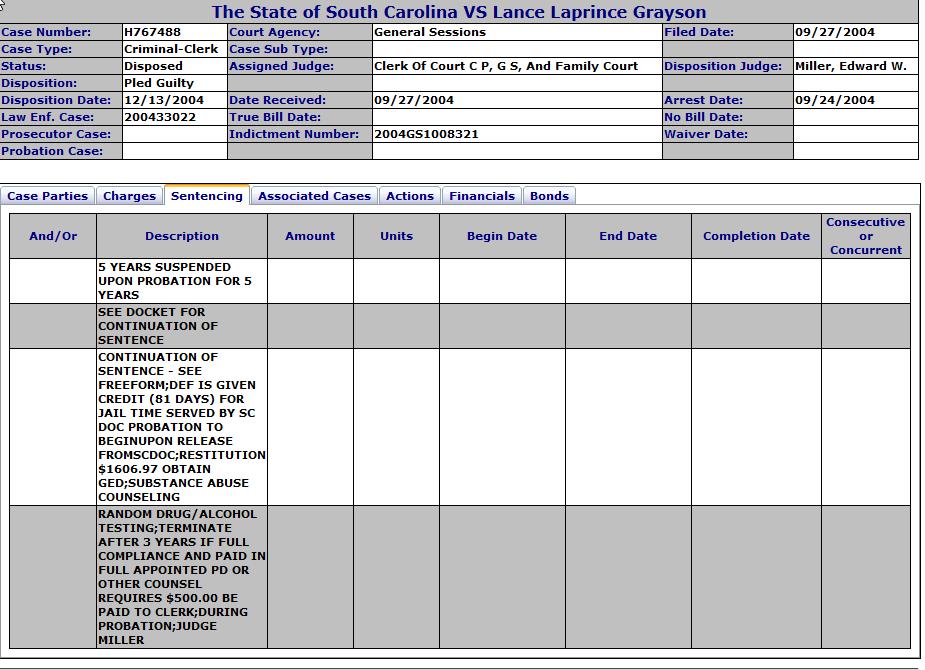 At least someone was effective at keeping this serial offender off the streets.

Kevin Lee Benjamin Williams of Walterboro was killed when he wrecked his vehicle while fleeing from Beaufort County deputies on Hilton Head Island.  We can’t imagine why “King Kevin Williams” would flee from law enforcement. Must have been the cops’ fault. 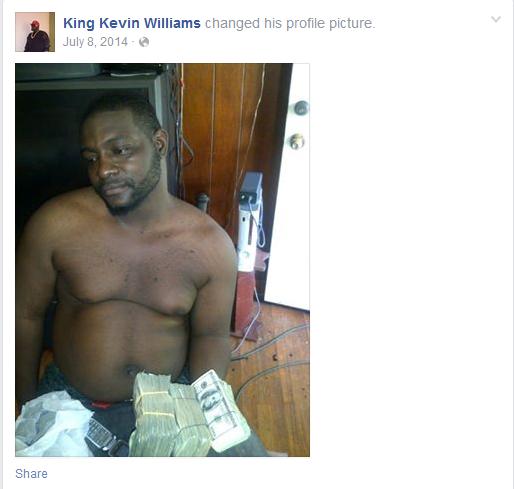 Actually, it might have something to do with the fact that Williams was on probation and was free on a $25,000 bond for an October 6th, 2014 charge of Trafficking Crack. Look how quickly the 14th Circuit Solicitor dismissed that charge. Dude hadn’t even been dead a full 24 hours before they cleared that off the docket.

There was no attempt to violate Williams’ probation after his last arrest. Do we even have probation and parole agents anymore or did they do away with all of them?

While he was busy fleeing from police and smashing into trees, Williams also killed 24 year old LaTrice Ferguson. Ferguson had no criminal history and probably had no idea what Williams did for a living. 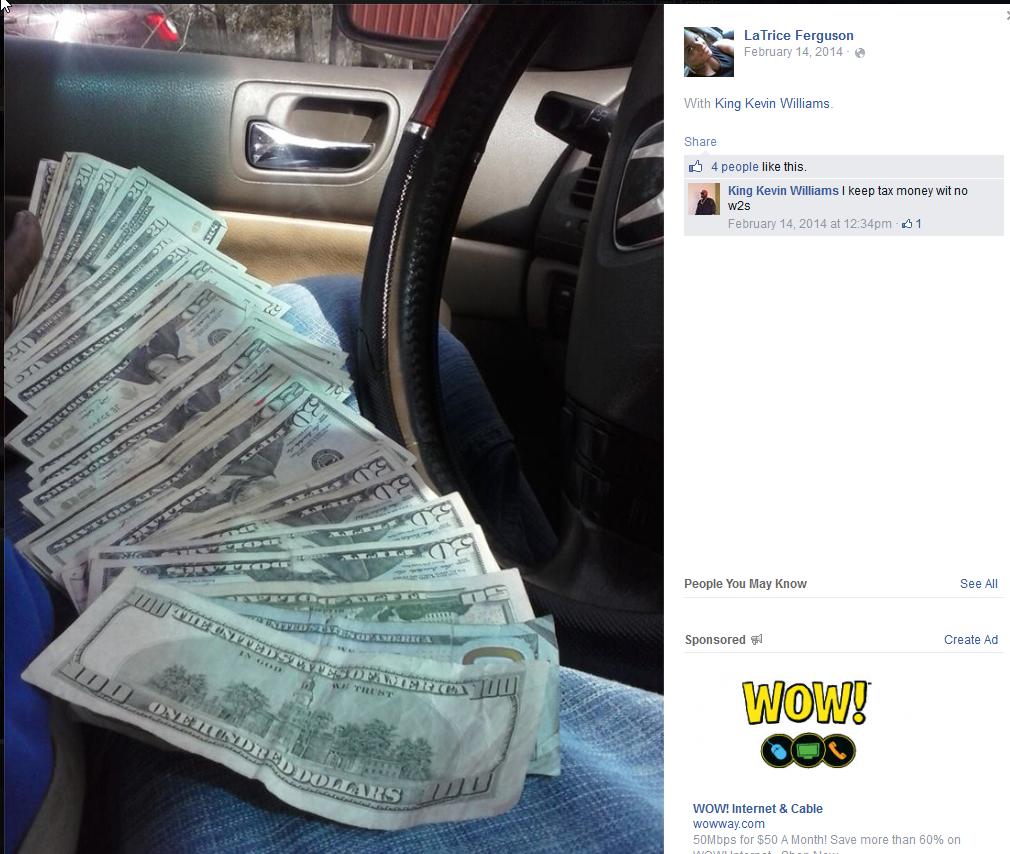