We thought we would bounce over to the 1st Circuit and see how some of the Dorchester County methamphetamine cases we have covered turned out.

Our first stop takes us to the August 2014 bust of a meth lab on Habersham Court in Wescott Plantation. Three meth mopes were charged in that case. They are Wendy McAllister, Michael Foiles and Stacy Hall. The meth lab was found at the home of McAllister at 4805 Habersham.

Disposal of Methamphetamine Waste - Dismissed by the 1st Circuit Solicitor.

McAllister was given the above breaks even though she was arrested again in December of 2014 for possession of meth while free on bond on the above charges. That charge was also dismissed by the 1st Circuit Solicitor.

A check of McAllister’s current status shows she is on probation and she is currently incarcerated in the Dorchester County jail on unknown charges.

Michael Foiles caught a huge break, too, in spite of his prior drug history in Berkeley County.

Four (4) counts of Possession of Narcotics - Dismissed by the 1st Circuit Solicitor.

Trafficking Methamphetamine - Reduced to Manufacturing Meth by the 1st Circuit Solicitor. Sentenced to 10 years, suspended in favor of 120 days time served and 4 years of probation.

After his arrest in August, Foiles was sent to the Department of Corrections. He was released from their custody two days after he accepted this sweet plea deal from the 1st Circuit Solicitor. 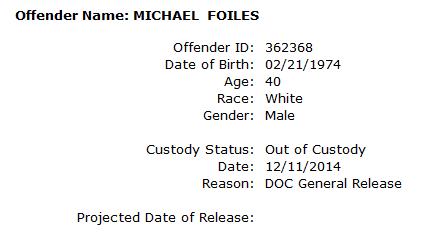 Stacy Hall agreed to a plea deal in October of 2014. 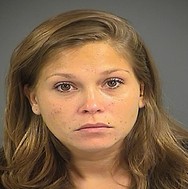 She plead guilty to 2nd Offense Possession of a Controlled Substance. She was sentenced by judge Diane Goodstein to 1 year, suspended in favor of 2 years of probation and 4 months of picking up litter.

Her charge of Possession of a Controlled Substance in Berkeley County from July of 2014 is still pending. Hall was free on a PR bond when she was arrested at the Wescott meth lab.

Next up are Ricky Dwayne Johnson and Kristi Gladstone, a couple of meth mopes who were busy working their mobile meth lab when they ran from the cops in Orangeburg County and wrecked their car in May of 2014.

Johnson was charged with Manufacturing Methamphetamine and Failure to Stop for Blue Lights. He plead guilty to both charges. Judge Howard King sentenced him to 10 years, suspended to 5 years and 5 years probation on the meth charge. Johnson was sentenced to 3 years on the failure to stop charge. Concurrent, of course.

He will actually serve less than three of those years. Truth in sentencing - ain’t it great! It would be if it actually existed. 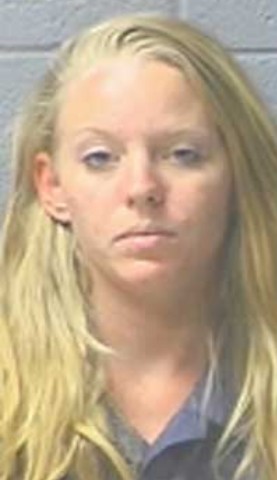 Kristi Gladstone was charged with Manufacturing Meth. She plead guilty and was sentenced by Judge Edgar Dickson to a YOA term not to exceed 5 years, suspended on one month time served and 4 years probation.

Judge Dickson also took Gladstone’s plea for her pending charges from 2014 in Dorchester County. She had been charged in March with two counts of Manufacturing Meth. She was given the same sentence as above on each of these two charges. Set to to run concurrently, of course.

Next up is William Trevor Alexander whom we first profiled in January of 2013. He has a rather extensive history of violent crimes and drug charges.

Alexander was charged with Manufacturing Meth in Dorchester County in November of 2013. He plead guilty in September of 2014 and Judge Maite Murphy sentenced him to 10 years, suspended on 8 eight years and 2 years probation.

Our final meth update is the case of Amy Burgio. She was busted by DCSO in July of 2013. We decided to do this update because we noticed a number of incoming links from Google searches of her name.

In December of 2014 Burgio plead guilty to Possession of Meth and 2nd Offense Manufacturing Meth. She was sentenced by Judge Kristi Harrington to 3 years on the possession charge and 6 years, suspended to 3 years and 2 years probation on the manufacturing charge.

I guess we can’t complain too much about the female judges in the 1st Circuit when it comes to sentencing female meth mopes. Judge Edgar Dickson seems to have a soft spot for females who cook meth and try to blow shit up, though.