We can’t help but wonder if the Governor is politically tone deaf or if she is just shying away from the inevitable controversy a clean sweep of the Berkeley County Sheriff’s Office is destined to bring. Instead of bringing in someone from the outside the Governor chose to appoint an insider. On Wednesday she appointed C.W. “Butch” Henerey as interim sheriff. Henerey, former Chief Deputy of BCSO, retired after the primary election last year. While reviews of Henerey from citizens, politicians and law enforcement appear to be largely in favor of his appointment and his qualifications as a “nice guy”, we have our reservations.

Yes, he might be a great guy. Yes, he has a lot of experience. Yes, he is familiar with the inner workings of BCSO. And therein lies the problem.

Henerey has been by DeWitt’s side since before he won his first election. He has worked for and with DeWitt since he took over as sheriff in the 1990’s. As a result, we can all safely assume Henerey knows where the bodies are buried and plenty of other secrets regarding the dirty deals and dirty birds at BCSO. Even if he didn’t participate in those dealings, his presence there for 20 years calls the question. Can you really hold a position of authority for 20 plus years in a department known for numerous ethical lapses, mismanagement and outright corruption and not be aware of or tainted by it? That is a question the Governor apparently failed to consider. In spite of what folks think of Henerey as a person, his appointment only serves to the perpetuate the good ol’ boy impression of government and politics in Berkeley County and the state of South Carolina.

One thing we can be sure of with this appointment, however. Don’t count on there being a complete audit or thorough investigation of alleged wrongdoing or mismanagement prior the election of a new sheriff. Given the list of candidates said to be running for the office now, we doubt there will be one.

We have been MIA for the past couple of days because we have been digging into the plethora of candidates who have suddenly materialized. We have received a ton of correspondence from folks who know these people. We have found that every candidate except for one has ties to either Wayne DeWitt or BCSO. This explains why none of these candidates have ever stepped forward to challenge DeWitt prior to this. Every one of these candidates are now claiming changes need to be made, but none of them would say that while their pal DeWitt was running the show. That says a lot about them. Several of the candidates have some serious ethical issues of their own.

A couple of the self-professed candidates really have no chance. Franco Fuda, currently police “chief” in Bonneau announced his intention to run at a breakfast meeting of the Berkeley County Republican Party. He is not a serious contender and will end up staying in Bonneau writing tickets for “obscene” bumper stickers to 70 year old women or chasing down folks who have Bulls Balls hanging from their trailer hitch. Fuda has not yet registered with the State Ethics Commision.

We have seen the name Shane Judy mentioned as a possible contender in the comments section of several local news sites. Judy used to work with the South Carolina Highway Patrol. Our law enforcement sources tell us when he got a job as a contractor in the Middle East he put all his gear in his patrol vehicle, locked it up in the parking lot and told his supervisors where to find the SCHP property. Then he walked. We are told Judy couldn’t understand why SCHP would not re-hire him when he came back to the U.S. He is currently a Moncks Corner police officer. He has yet to register with the State Ethics Commission.

The current chief of the St. Stephens P.D. has announced his desire to run. John Waters isn’t well known to many outside of law enforcement and they don’t seem to hold a very high opinion of him. Waters has accumulated $500 for his campaign coffers.

Lt. Will Rogers of BCSO is making noise about running. He has deep family ties to BCSO since his father was sheriff of Berkeley County when he was indicted by the FBI for taking bribes from agents posing as members of the Mafia in 1981. Corruption in Berkeley County is so well known the FBI had even heard organized crime members in New York discussing it, so they initiated an investigation that resulted in the charges against Sheriff James Rogers. Sheriff James Rogers entered a guilty plea, but was eventually pardoned by another crook, President William Jefferson Clinton. Can you blame the son for the sins of the father? Probably not, but being raised in that corrupt environment and his support of DeWitt says a lot to us. Will Rogers has not yet registered with the State Ethics Commision.

One of the most surprising announcements is that of former BCSO captain Ricky Driggers. He “retired” from BCSO several years ago, allegedly due to health reasons. We are told those health reasons had something to do with the doubt he could survive in prison. Driggers seems to have a lot of supporters pushing the “health” issues as the reason for his retirement. We find that strange since we have talked to several people to whom Driggers has told a different story.

The narrative he has been telling for the past few years is that he retired under threat of indictment due to an FBI investigation into irregularities arising out of his mismanagement of the narcotics unit. The FBI tends to frown on things like money missing from drug dealers, planted evidence, the failure to obtain search warrants before raids and various and sundry other ethical lapses. The way Driggers tells the story, the indictments were quashed when he agreed to retire from law enforcement and never return. You have to wonder how long he will last now that he has shown his intention to violate an agreement he willingly tells people he made with the feds. Or has Driggers been lying to people? Driggers has yet to file with the State Ethics Commission.

Current Moncks Corner police chief Chad Caldwell has announced his intention to run. Caldwell has been chief at Moncks Corner since he was ushered out the door at North Charleston P.D. years ago. Prior to that he was a SLED agent said to be in a rather untenable position with SLED Chief Stewart when Mickey Whatley brought him into NCPD as a Captain. He was made chief at NCPD when Whatley was run off due to politics. His run appears to be a political ploy by Bill Peagler, his former boss at Moncks Corner who was recently elected to the position of Berkeley County Supervisor and who has been trying to surround himself with cronies since he was sworn in. We are told Caldwell has some currently unspecified domestic issues that will likely be brought out if he runs. We can’t wait to hear about that. We can’t help but wonder when we will hear about Caldwell resigning as Chief of the Moncks Corner Police Department as required if he truly plans to run for sheriff of Berkeley County. Caldwell has registered with the ethics commission but has reported no contributions as of this morning.

Chief Deputy Rick Ollic of BCSO has also been making noises about wanting to be sheriff. We are told he isn’t well liked by citizens or the rank and file of BCSO who tell us he talks to them like they are dogs and treats them like crap. He is not a serious candidate and has not registered yet with the State Ethics Commission.

Solon Dewayne Lewis appears to be the preferred candidate of Wayne DeWitt. We have been told DeWitt has been making appearances at several black churches in what has been termed an “apology tour” in which DeWitt is pushing Lewis as his replacement. They have appeared at a church in Alvin and are scheduled to appear at Charity Church in Huger. The fact that DeWitt is pushing for Lewis should automatically disqualify him in the eyes of any voter with common sense. We are told Lewis is currently working security at Santee Cooper. Contributions to Lewis’ campaign thus far are shown below. 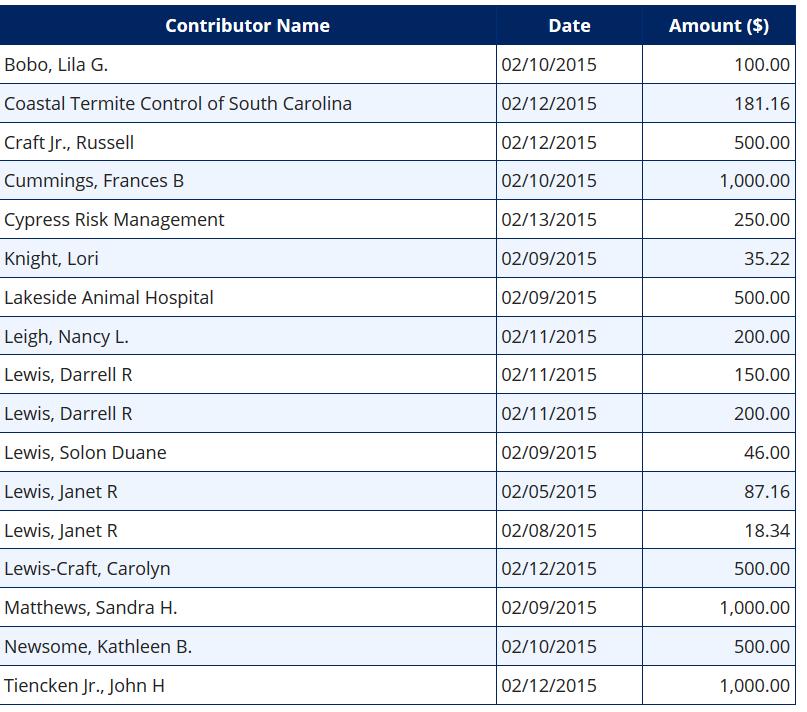 We previously reported on the irregularities involving local attorney Donald “Donnie” Gamache with regard to recent events in Berkeley County. We reported on the friendship between H. Wayne DeWitt and Gamache, the fact that Gamache was once a deputy working for DeWitt and plays Shriner games with him. We discussed the fact that Gamache was instrumental in obtaining a statement from Justice Jenkins, the Hanahan police officer who pursued the drunken DeWitt, in which the officer changed his story from “pursuing” to simply “following”. In addition to being DeWitt’s pal, Gamache is also the personal attorney of Officer Jenkins. Anyone see any ethical violations there? We certainly do.

We mentioned the possible reasons behind that change in the officer’s narrative and the pressure that may have been applied to get him to write that statement. We also reported on the statement of Hanahan’s Chief Cochran to SLED agents. Cochran indicated when Gamache delivered the officer’s statement he said to the Chief, “Wayne really appreciates the way ya’ll are handling this.”

Gamache is a factor in this special election because he has been seen squiring around potential candidate for sheriff Marty Housand. We asked whether such an ethically challenged link to the former sheriff could be overlooked by Berkeley County voters. We decided to poke around at the SC State Ethics Commission website and found some very interesting stuff. Of the $8,900 given to Housand by campaign contributors $4,000 of it came from Gamache via a personal contribution, contributions in the names of his family members and a contribution from his law firm. Housand retired from SCHP and served as the police chief in Santee for less than a year before he was “forced out” by Mayor Donnie Hilliard. 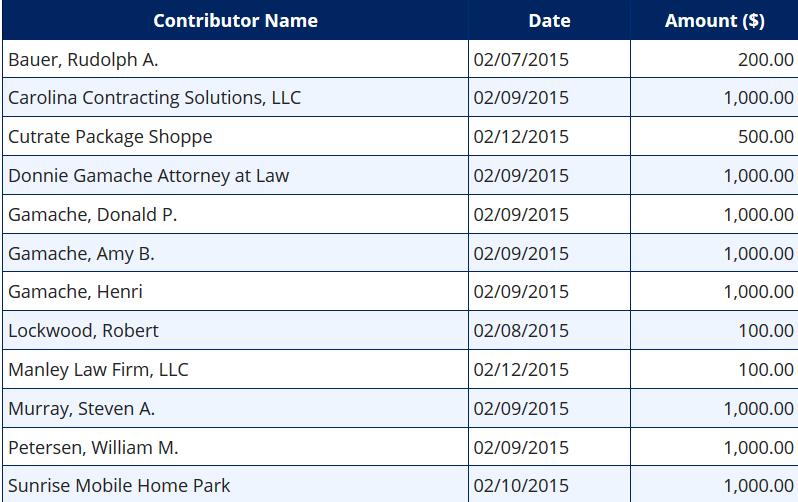 Danny Isgett is also running for the office of Berkeley County sheriff. He is currently a lieutenant with the Charleston County Sheriff’s Office. His father was the Berkeley County sheriff between the last term of convicted felon M.C. Cannon and the beginning of the DeWitt era. Ray Isgett is the sheriff who initially succeeded in demoting DeWitt and eventually running him out of BCSO. We haven’t heard much about Lt. Isgett except that those who know him like him. Isgett has one contribution to his campaign war chest so far, and that came from his brother.

The only candidate with no ties to DeWitt or the previous dealings or administrations at BCSO, and the only one who had the guts to see the need for change and take action on it, is Brian Adams. He is currently a lieutenant with the North Charleston Police Department. Adams was the only serious challenger to DeWitt in the last election. The only people we have heard speak poorly of Adams are those who supported DeWitt in the last election.  Their vitriolic reaction to him should serve as a clue for most folks. If the supporters of the ethically challenged candidate attack you for running against their man, they must be afraid of something. Contribution to Adams campaign are show below. 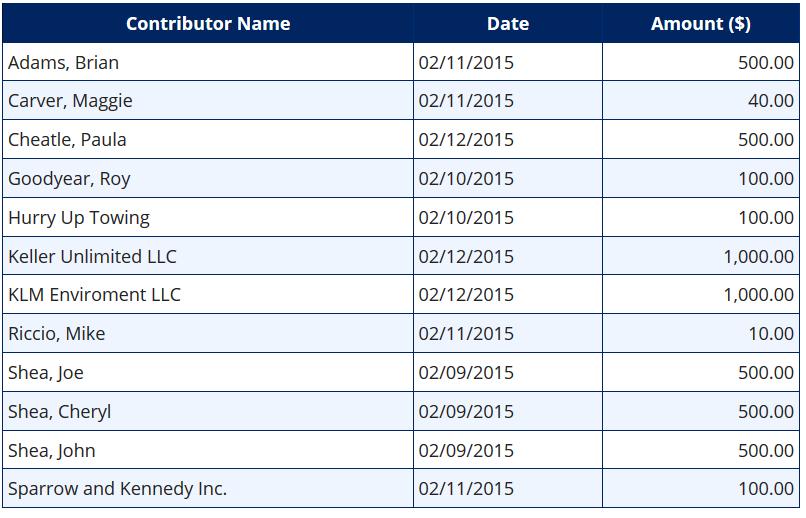 As we have pointed out before, we don’t live in Berkeley County. Due to this, we don’t endorse specific candidates. We will however, point out the issues with the candidates that the your local “news” outlets avoid and let the voters decide.