This video of a post arrest phone call seems to indicate Sheriff DeWitt also has a pattern of behavior of seeking friends (or employees) with “bennie-fits” and he propagated this pattern throughout his department. At least until he was sued for it and the taxpayers of the state paid his way out of it as they have done so many times in the past. We base that conclusion on some new information we recently received.

Things seem to be getting worse for DeWitt as some folks out there see the writing on the wall and begin jockeying for position. It seems that as the DeWitt plane catches fire and heads for the ground some folks are snatching up parachutes (read: evidence) and jumping. We can already see the sharks at BCSO circling now that they have smelled blood in the water.

As entertaining as that vision might be, let’s get on with the task at hand - patterns of behavior.

We would first like to bring your attention to a 2003 lawsuit. 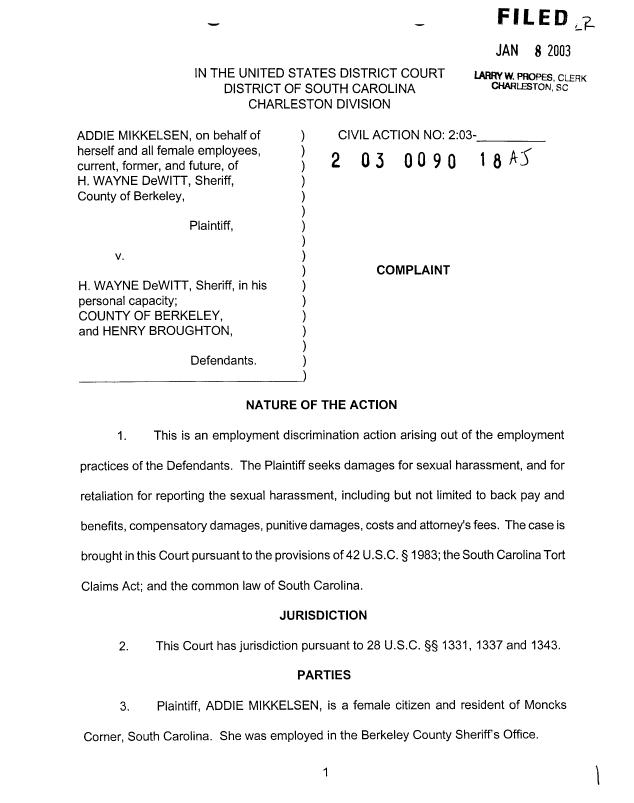 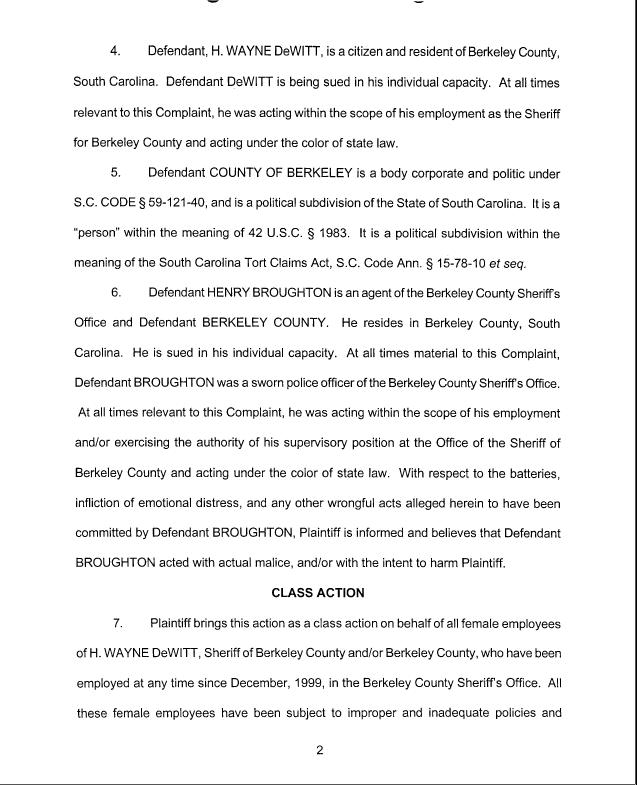 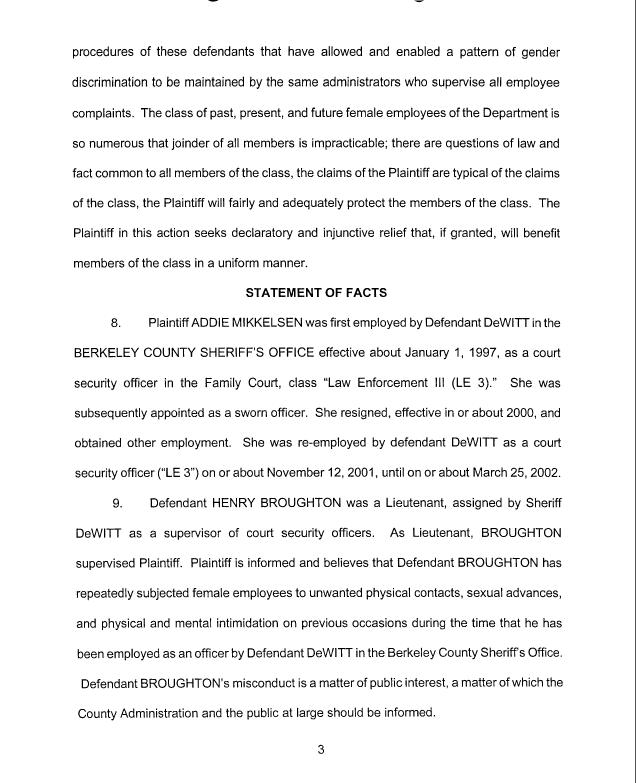 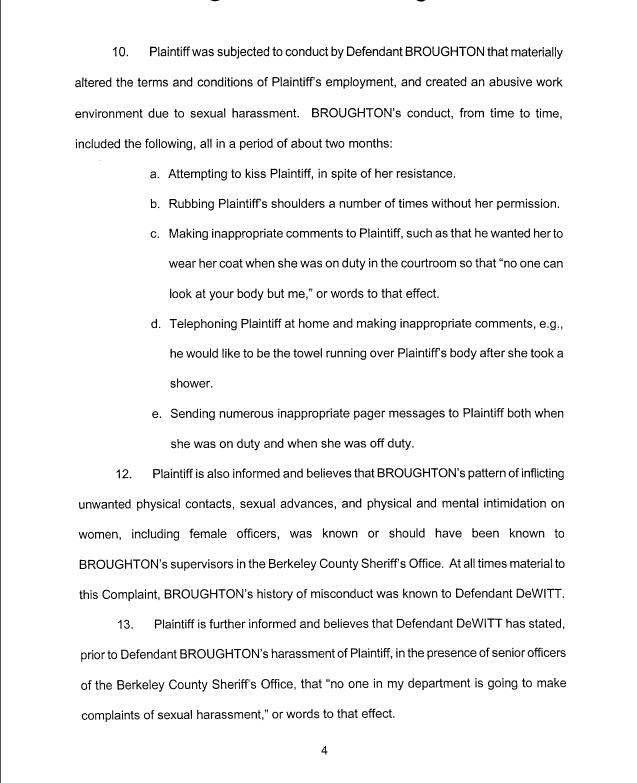 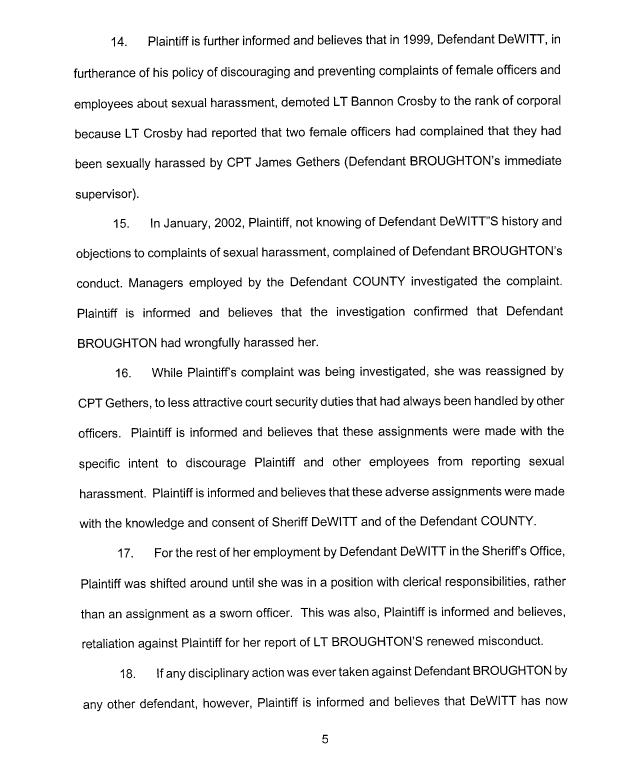 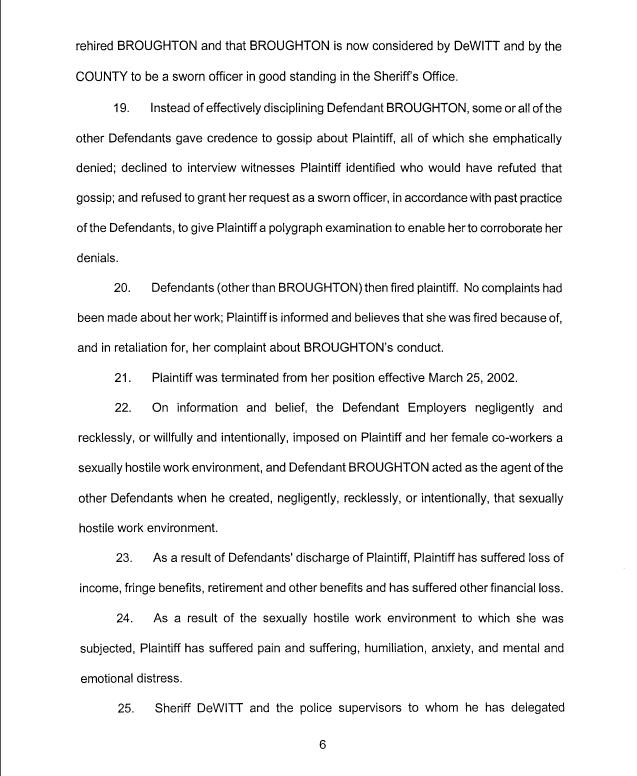 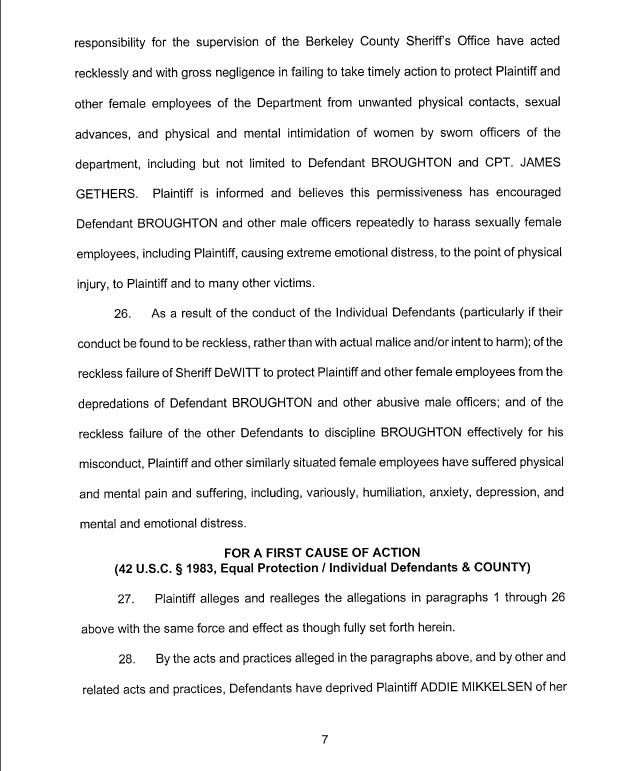 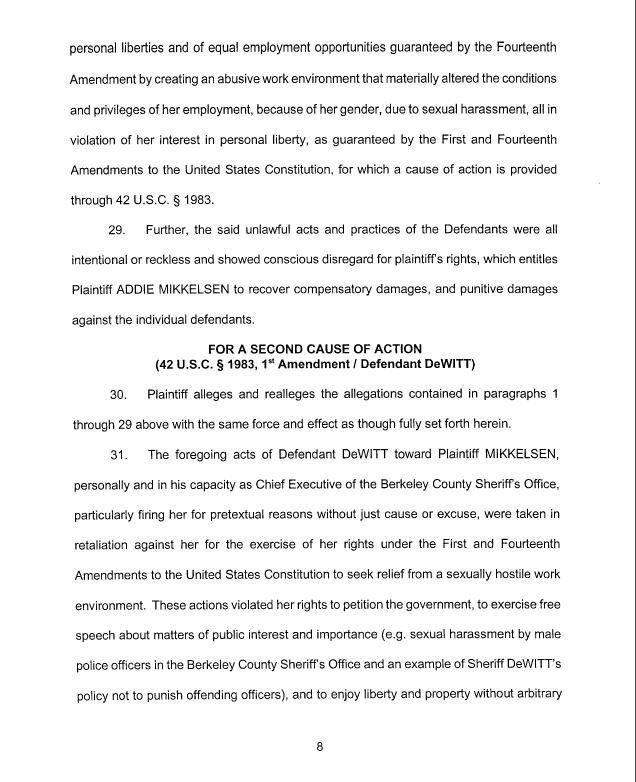 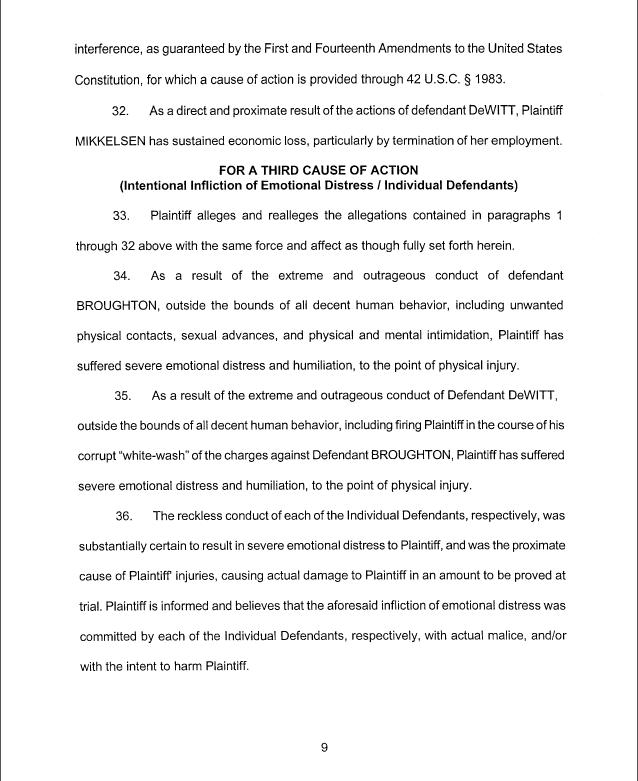 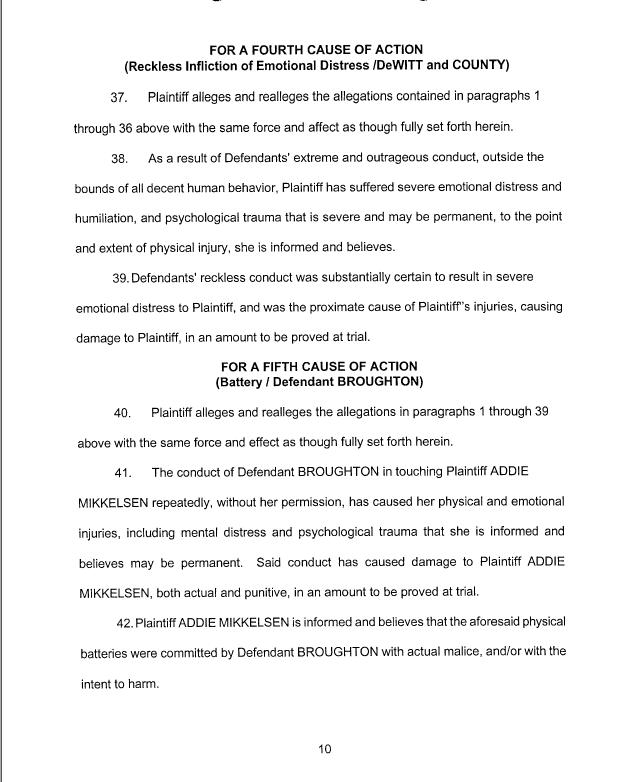 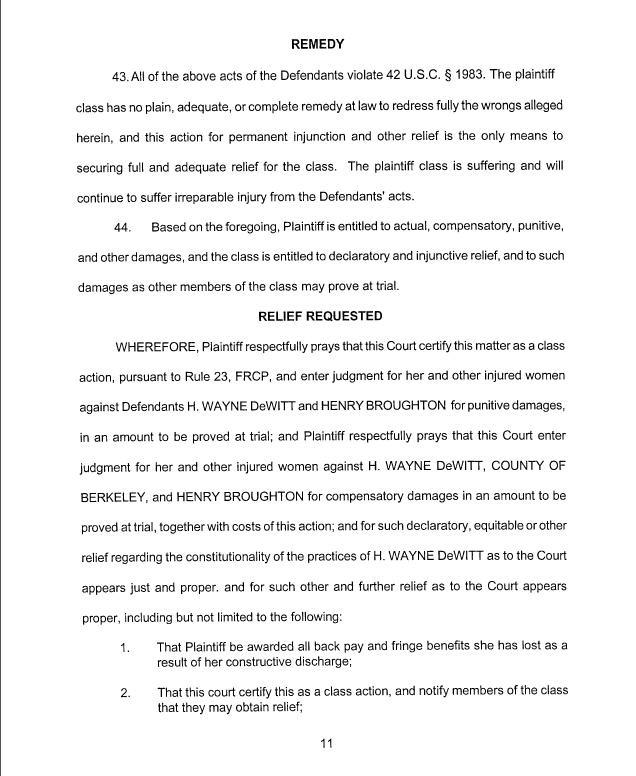 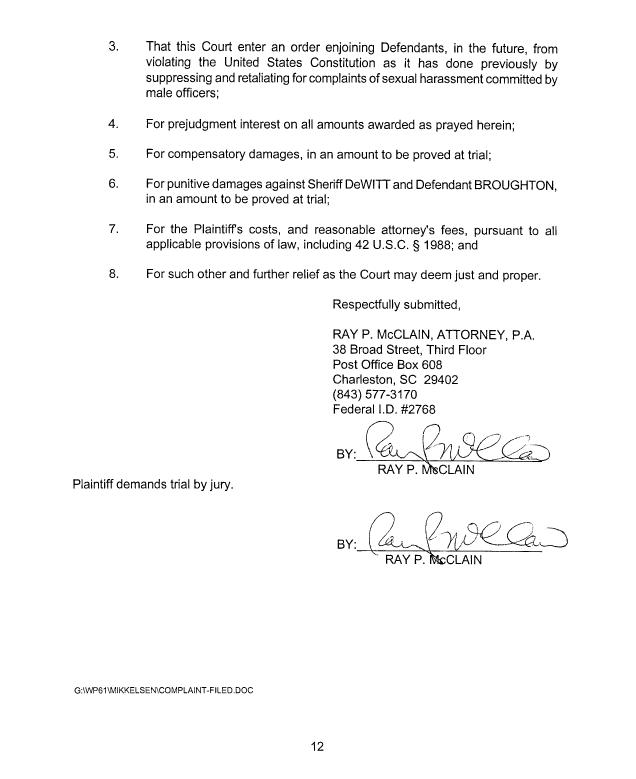 We hope you read all twelve pages. We can provide a brief summary for those who didn’t.

The complainant was a court security officer employed by BCSO when she was repeatedly sexually harassed by her supervisor, a Lt. Broughton, both on and off duty. Other females had complained of sexual harassment by Broughton’s supervisor, a Capt. Gethers, in the past. The complainant alleged DeWitt was aware of this pattern of behavior by both of these supervisors and did nothing about it.

After the complainant filed her grievance with her chain of command in January of 2002, she alleges supervisors and fellow employees were allowed to gossip about her with no consequence. Vilify the “troublemaker”. Just one DeWitt tactic we see frequently.

Paragraph 13 is very revealing because it tells us Sheriff DeWitt had no plans to take sexual harassment complaints seriously. Why would any chief executive say something like that? Keep reading.

Paragraph 14 tells us what happens to a supervisor who ignores the unlawful and almighty will of Sheriff DeWitt by documenting the complaints and forwarding them up the chain as required by federal law. He gets punished by the Sheriff by being demoted from the rank of lieutenant to the rank of corporal. That is what doing your job and obeying the law gets you when you work for DeWitt’s BCSO.

The complainant alleges Sheriff DeWitt punished her by transferring her to menial duties and ultimately firing her. Transferring the victim and not the perpetrator makes perfect sense in Wayne’s world. There is some discussion about whether or not Lt. Broughton was ever punished. Some say he was fired by DeWitt, but re-hired immediately after DeWitt won re-election in 2002.

How about paragraph 35 where the word “corrupt” is used? Nice to see someone else noticed.

We find paragraph 15 to be the most interesting and it should have served as a sly clue to Sheriff DeWitt he was about to get his ass handed to him. An unfortunate effect of believing you are all powerful is you fail to see things like that.

Note the words “…DeWitt’s history…”. That history unexpectedly came to the fore when this case went to court. We say unexpectedly because BCSO is said to have a history of shredding, burning or otherwise disappearing unfavorable documents.

The case went to trial in 2004 but was abruptly ended when a settlement was mysteriously reached in the middle of the testimony phase. 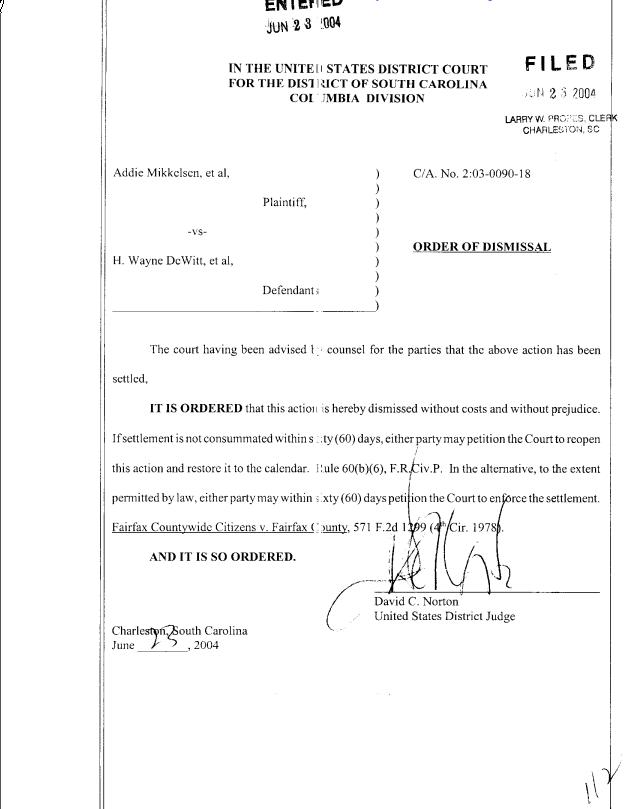 Want to guess who was on the stand when that settlement was suddenly offered up? You got it - Sheriff DeWitt. He was asked if he made it plain to his staff he would not accept any sexual harassment complaints in his department. He said that was not true. He was then asked if he had ever been the subject of any sexual harassment complaints. DeWitt responded he had not.

The plaintiff’s attorney then produced the documents you see below proving that Sheriff DeWitt may have perjured himself. Or maybe his memory was bad. Or maybe he only thought they were asking if he had been accused of sexual harassment as Sheriff. You decide which is the most likely answer.

Shortly thereafter, the judge was notified that the defendants had suddenly offered up a fairly significant settlement. At this point we don’t yet know what the terms of that settlement were, but rest assured they cost the South Carolina taxpayer a bundle.

In February of 1991 Wayne DeWitt was a Captain in the Berkeley County Sheriff’s Office working under Sheriff Ray Isgett.

The initial complaint of sexual harassment against Captain DeWitt indicated a bit of a fetish for touching the buttocks and breasts of female employees, sometimes in full view of other employees. DeWitt said he was just liked to “cut up”.

The initial complaint was made to then Major Hubert Harrell. The general public won’t recognize the name, but those of us who do our research and a lot of local police officers do. Harrell is currently the Director of the South Carolina Criminal Justice Academy.

The victim’s statement indicates the inappropriate sexual behavior (assault) had continued in spite of her previous attempts to tell Captain DeWitt it bothered her and needed to stop. 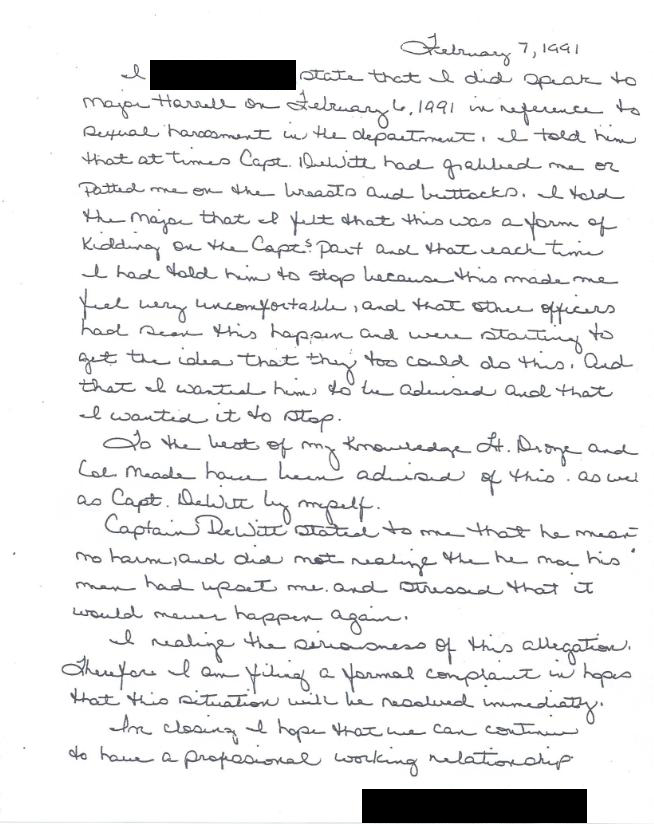 A memo from a Lt. Droze to Sheriff Isgett indicated the victim of the sexual harassment had been told to think about her complaint overnight because some action would have to be taken if such a serious complaint was filed. Does federal law require warning the victim of possible repercussions?

We have read this memo a few times and are still having trouble understanding how someone who could type up a fairly lucid narrative of the sequence of events can misspell the word “butt” so many times. Maybe “butte” is French.

After making the initial verbal complaint the victim then went to Capt. DeWitt and informed him she had filed the complaint and he told her the inappropriate behavior would not happen again. 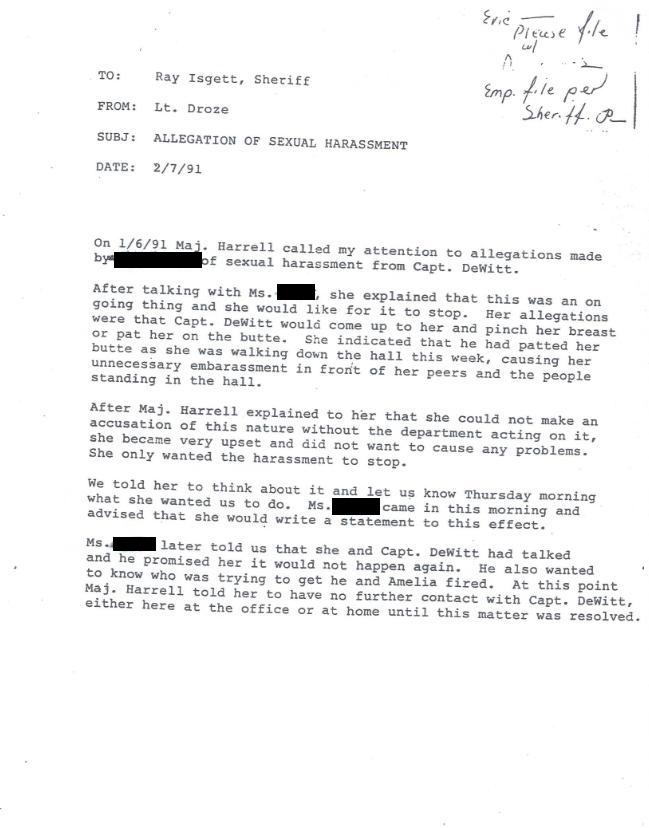 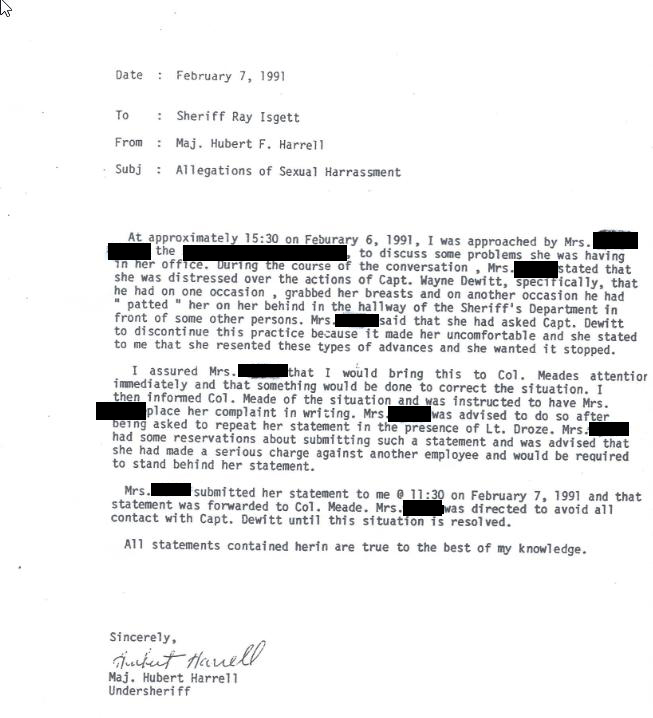 Captain Wayne DeWitt also provided a written statement in which he attempted to explain his inappropriate and unlawful behavior. He claims the victim told him the whole thing was getting blown out of proportion and tried to minimize the whole thing. Curiously, she did not say that in her own statement. In fact, she was pretty emphatic she was filing a formal complaint and wanted the undesired sexual contact to stop. That is quite a bit different than the way DeWitt tried to spin it.

Captain Wayne DeWitt’s written statement also confirms the allegations made by the victim and admits his inappropriate sexual contact with her.

The fact that DeWitt used the phrases” “getting blown out of proportion” and “horseplay on my part” tells us the DeWitt strategy of minimize and deflect goes back decades.

After reading DeWitt’s statement it becomes very clear why he would tell his senior officers he would not tolerate sexual harassment complaints in his department. 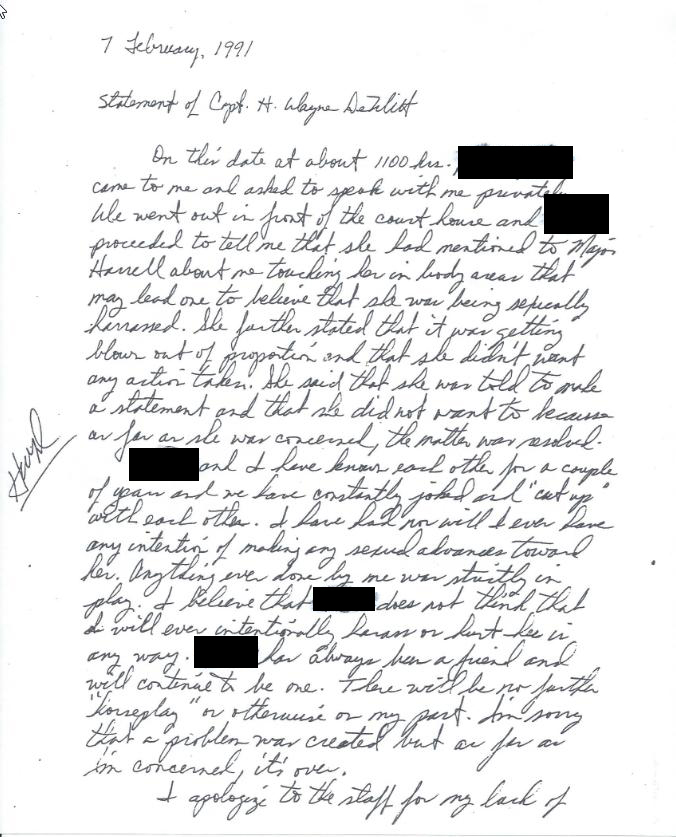 Well, look at that! There is another hollow H. Wayne DeWitt apology.

We are told DeWitt was demoted from the rank of captain to the rank of lieutenant by Sheriff Isgett after this incident.

The note below gives us an indication of DeWitt’s management skills. Maintaining documentation on reserve officers required by law and getting necessary supplies to those who truly need them didn’t seem to be priorities for DeWitt in 1991 after his demotion. Not that there has been much change since. 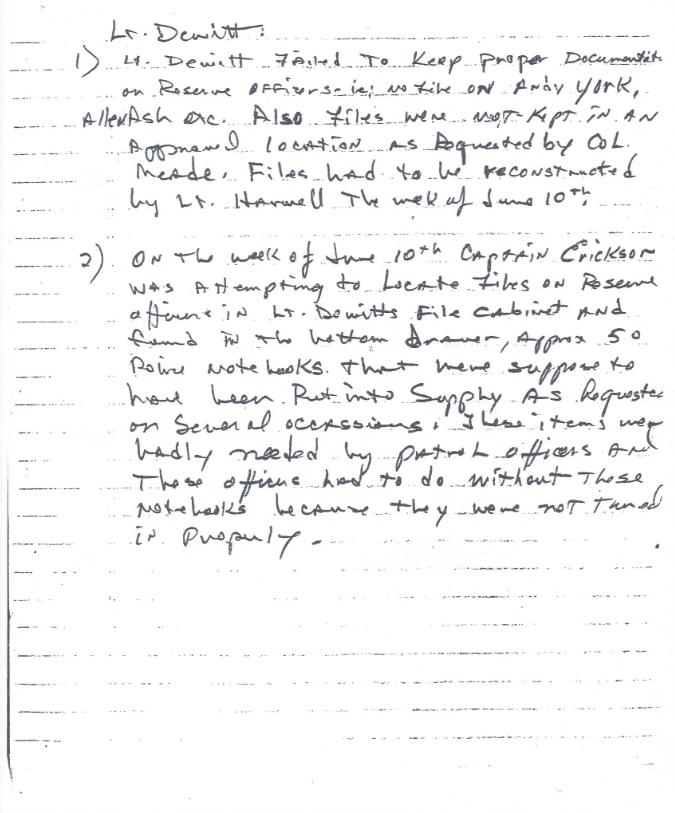 We are working on obtaining documentation which will reveal exactly why DeWitt was “allowed to resign” by Sheriff Isgett in 1992. We have talked to four people who have told us the same story, but that whole BCSO burning and shredding thing is getting in the way of confirmation. For the time being, we will just say it allegedly had something to do with another wrecked county vehicle.

You folks shouldn’t forget that Wayne DeWitt is sorry. And he apologizes, too. 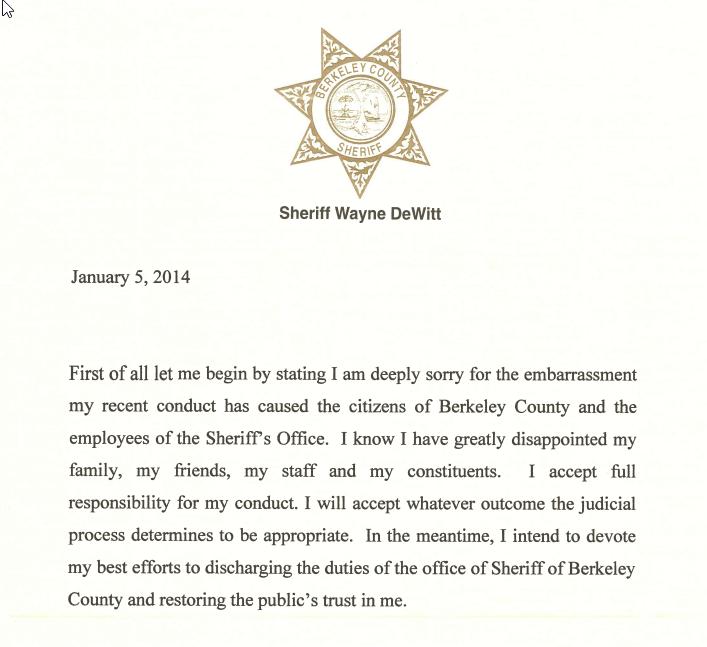