The Orangeburg County Sheriff‚Äôs Office has named a person of interest in the recent quadruple murder in Holly Hill. That person is none other than CTL alumni Michael Deroaknel Smith, Jr., aka “Rambo”, aka “Mykel Smith“, aka Mikel Smith. We first wrote about Smith in 2012 when he was rounded up by U.S. Marshals on five outstanding charges including CDV and narcotics related offenses. We also wrote about Smith in Part II of our series on the gang known as “Town of Lincolville/Cut Throat Jack Boys”.

Smith is said to have denied any involvement in the Holly Hill murders.

An interesting post went up on Smith‚Äôs page two days after the murders. Probably just a coincidence, huh? 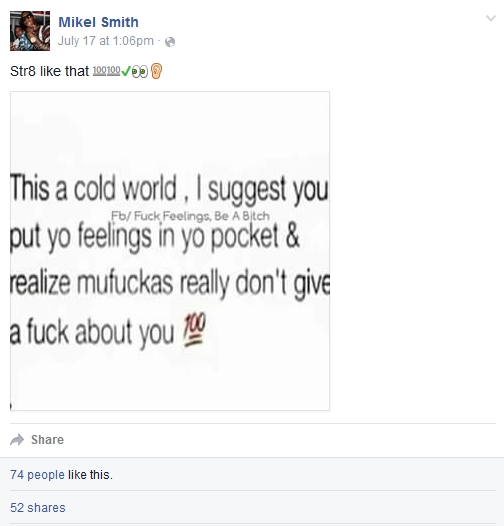 Smith is a serial violent offender with several murder/attempted murder charges to his credit, as well as a number of violent assaults and robberies. Of course, they were¬Ý usually in the 9th Circuit so you know they were dismissed. Let‚Äôs run through his extensive record in the tri-county area. You might want to grab a snack and something to drink. This will take a while.

Discharging a Firearm into a Dwelling - Plead guilty. Sentenced by Judge Doyet Early to 2 years.

Possession of a Firearm on Property Where Alcohol is Sold - 2 years, concurrent.

Unlawful Carrying of a Pistol - Dismissed by the 1st Circuit Solicitor.

Assault With Intent to Kill - Dismissed by the 9th Circuit Solicitor in 2009 with the notation “Defendant has a pending murder charge in Berkeley County”.

In spite of intensive search of public records we failed to find any mention of the Berkeley County murder charge.

Three (3) counts of Armed Robbery and three (3) counts of Kidnapping - Dismissed by the 9th Circuit Solicitor in 2009 two months after she dismissed the Charleston County AWIK charge. Notation reads, “Exonerated by co-defendant Turner.”

Assault & Battery of a High & Aggravated Nature - Dismissed as part of a guilty plea on another charge.

Unlawful Carrying of a Pistol - Dismissed - see above.

Unlawful Carrying of a Pistol - Dismissed - see above.

Threatening the Life of a Public Official - Plead guilty to this charge. Sentenced by Judge Deadra Jefferson to 2 years, suspended in favor of 18 months of probation.

Two (2) counts of Possession of Crack - Plead guilty. Sentenced by Judge Deadra Jefferson to the same sentence as above, concurrent, of course.

Unlawful Carrying of a Pistol - Plead guilty. Sentenced to 1 year, suspended in favor of 1 year of probation.

Possession of a Stolen Pistol - Dismissed by the 9th Circuit Solicitor.

Assault & Battery of a High & Aggravated Nature - Dismissed by the 9th Circuit Solicitor, allegedly at the request of the victim.

2nd Offense Possession of Crack - Plead guilty. Sentenced by the Felon‚Äôs Friend to 4 years in August of 2013.

CDVHAN - Dismissed by the 9th Circuit Solicitor even though a bench warrant had to be issued for failure to appear. 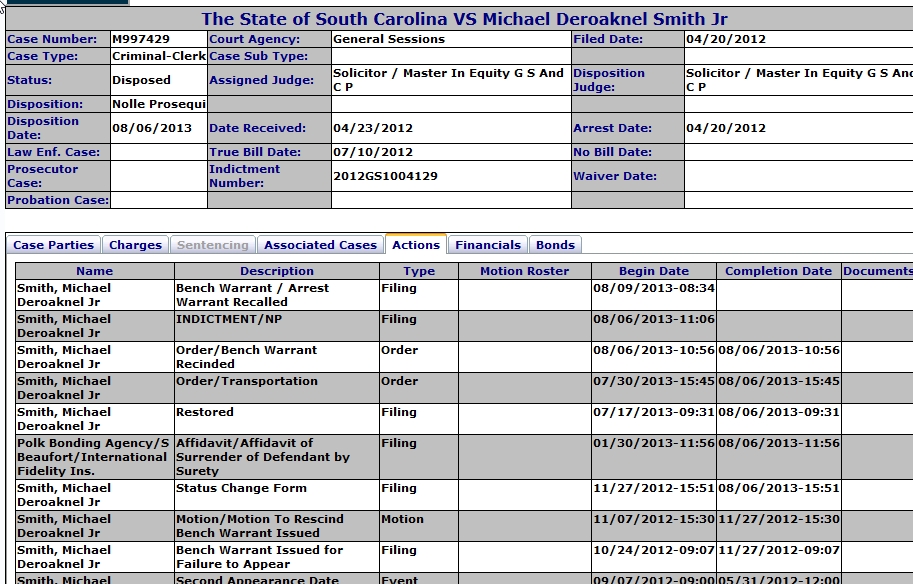 Possession of a Weapon During a Violent Crime - Dismissed by the 1st Circuit Solicitor.

1st Degree Assault & Battery - Failed to appear in court so the 9th Circuit Solicitor dismissed the charge on July 21st, 2015. Seriously, how the heck can you be expected to prosecute someone when they don‚Äôt even bother to show up court?

That certainly amounts to a lot of charge in the past 10 years, many of them violent. Smith is another one you can point to the next time some liberal idiot claims the criminal (in)justice system is “racist”. This should not be on the streets, period. He is a violet serial offender who keeps getting breaks from prosecutors and judges. Nothing new, unfortunately.