In case you haven’t noticed it in recent days, your local media outlets are pining for protests reminiscent of those in Missouri. Slanted headlines, incorrect information, and the spreading of innuendo and propaganda are what these folks live for. They tried to instigate this sort of activity in the case of the suicide of Denzell Curnell.

We were initially told Walter Scott had no criminal history. Our own research in Charleston, Berkeley and Dorchester counties showed only a couple of charges for driving under suspension and failure to pay child support. Some of the local media dug deeper and found a few other criminal charges including assault and battery and possession of a bludgeon (club). Some local outlets have chosen to ignore or minimize that information. WTMA reported this morning that Scott had “no criminal record”.

While the media chooses to gloss over the history of the deceased they gleefully tell you the officer involved has had exactly two complaints filed against him in the six years he has been a police officer in North Charleston. The media does this to give you the impression the officer has done something wrong.

Two complaints in six years? Only two in six years of working some of the highest crime areas in North Charleston? That is one hell of a record!

The media also feels it necessary to tell you the officer has used his Taser before, as if that is some indicator of whether he is a good officer or not. The hypocrisy is amazing. The use of the Taser in law enforcement was precipitated by the whining and crying of these same criminal apologists and media troublemakers. Years ago they were gnashing their teeth at the fact that violent suspects, particularly black ones, were being shot when they attacked the police. The Taser was introduced as a less than lethal option. What happened as a result? The same apologists and media whores started whining and crying about suspects, particularly black ones, getting tased. All of a sudden the less than lethal option they demanded was the newest “racist” tool used by the police.

The race-baiters at WCSC decided to contact the folks at Taser and put out a piece telling you it can only be used once. Not true, but why would they want to tell you that? It doesn’t fit their narrative. They have to selectively edit their information so they can stir up the low information demographic that keeps them in business.

Take a look at the image of the X-26 Taser below. Notice anything? One cartridge is loaded and ready for action before the Taser is holstered. See that extra cartridge attached to the handle of the X-26? Isn’t is strange WCSC chose not to tell you about that spare cartridge? It only takes a second and minimal effort to pop that cartridge off, click it into place and fire it off.

Anyone care to guess what officers practice when they are trained in the use of the Taser? That’s right, reloading and reloading on the run. So, if the officer was carrying the X-26 with a spare cartridge, and fired the first one with no effect, it is very likely he could have affixed that second cartridge before the Taser was taken from him by Scott. WCSC chose not to tell you about that possibility in their rush to misinform the public with their irresponsible speculation and fraudulent facts. 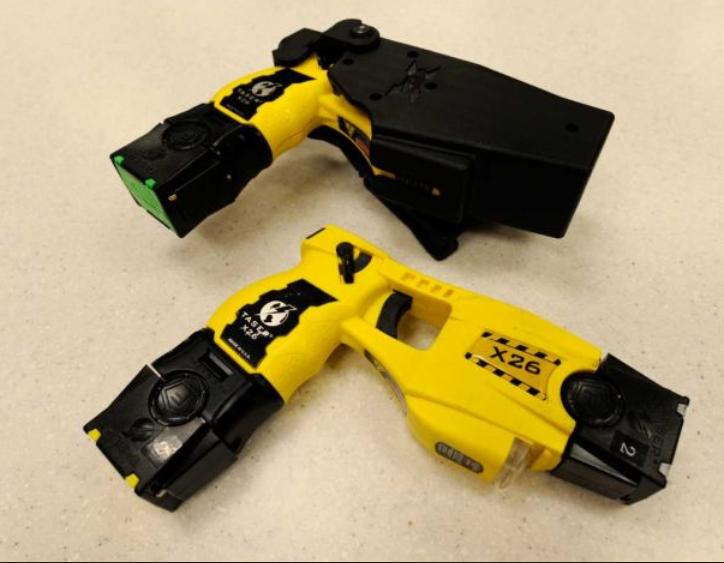 WCSC also chose to use an image of the Taser X-26P in their story. That version has one cartridge attached. WCSC used that photo in spite of the fact they have no idea which version of the Taser the officer was carrying. They didn’t exactly admit that, you have to read between the lines. Not that it matters. WCSC also slanted their article in an effort to make you believe a Taser without a cartridge installed is a harmless piece of plastic.

Here’s a suggestion for Lisa Weismann, that little weasel Harve Jacobs and the rest of the folks in the media - why don’t you actually do some “investigating”. Holster up a training firearm, then get into a struggle and let the “suspect” blast you in the shoulder or neck with a 50,000 volt “drive stun”. Your goal in this exercise is to protect your firearm and prevent the suspect from taking it from you. We can already visualize Jacobs flopping around like a fish while the “suspect” stands over him with the firearm taken from him and dispatches him to hell.

Since WCSC used the X-26P in their hit piece, let’s use it in the suggested scenario. The interesting thing about the X-26P is that holding the trigger down actually discharges the weapon for as long as the trigger is held. In other words, that old 5 or 10 second limit on the charge being adminstered can be bypassed.

A citizen asked us if these biased reports by the local media were ignorance or evil. We tend to go with evil due to the selective editing and failure to report all the facts. Since we broke the news of the incident on Saturday morning and subsequently published our research results about Walter Scott the media has been playing catch-up. Every article they have written contained a reference to the “black” suspect and opined the fact they didn’t know the race of the officer.  In spite of that they frequently mentioned Ferguson in their stories.

When the race of the officer was released on Monday they couldn’t wait to spin it to fit their narrative and ramp up their subtle race-baiting with additional references to Ferguson and “Black Lives Matter”. They conveniently ignore the fact that the entire debacle of Ferguson and “black lives matter” was based on lies told by criminals and gleefully perpetuated and aggravated by the liberal media.

Even though citizens of the Lowcountry are doing a great job calling out the media race-baiters with their voluminous comments on social media pages, the media folks continue their reckless run to stir up conflict. In their desire for protests and riots in the streets the media idiots have overlooked one very important fact. In addition to the lying criminals in the street and in the media, those riots in Ferguson resulted from the wishy-washy actions and outright complicity of a liberal Mayor, a liberal Governor and a representative of the state police who tried to coddle those rioters. The media got what they wanted and crucified law enforcement for their response to the riots. Once law enforcement was forced to back off by those liberal clowns and the city began to burn, the media crucified them for not doing enough to prevent the violence, looting and arson. Damned if you do, damned if you don’t.

South Carolina is a completely different animal and we suspect that sort of organized violence in the streets would get shut down rather quickly. Then the media could spend weeks telling you how racist it was to shut down the rioting, thievery and burning of businesses. Damned if you do, damned if you don’t.