The grunts doing the hard work on the front line at CPD have charged Tequan Perry with the March 23rd murder of Brandon Washington. Perry was charged with Murder and Possession of a Weapon During a Violent Crime. He has not had a bond hearing yet. The murder charge has to go before a circuit judge.

Let’s see what Perry has been up to in the past few years.

Failure to Stop for Blue Lights - Dismissed by the 9th Circuit Solicitor.

Possession of a Stolen Vehicle - Plead guilty. Sentenced by Judge Thomas “Felon’s Friend” Hughston to a YOA term not to exceed 1 to 5 years. The Felon’s Friend gave Perry credit for 485 days time served, even though he did not serve that time for this offense.

This charge was rolled into a plea agreement with charges from 2014.

And don’t forget the fact that the record shows Perry was allowed to bond out on the same $3,000 bond every time he failed to appear in court and a bench warrant had to be issued.

Unlawful Carrying of a Pistol - Plead guilty. Sentenced to a YOA term not to exceed 1 year.

PWID Heroin - Reduced to Possession of Heroin by the 9th Circuit Solicitor. Sentenced by the Felon’s Friend to a YOA term not to exceed 1 to 2 years.

Note the credit for 485 days time served on all these offense. Perry never actually spent anywhere near that much time in jail awaiting trial. He only spent 30 days in jail before making bond on the 2014 charges.

Perry was released from his YOA sentence in January. 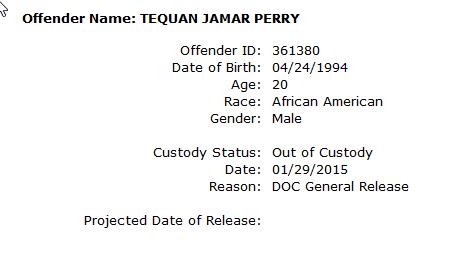 Perry is supposed to be on parole until September 2017.

Maybe he just got involved in a little criss cross, too, huh?