Lots of news to write about, but let’s begin with the shooting at Frankie’s Fun Park. It seems the big open parking lot is a favorite place to make drug transactions, at least for one drug dealer who was shot in the ass. 27 year old Harold Nicholas Austin ( the name reported by the media is incorrect) caught a bullet in the butt at the hands of 27 year old Maurice Thompson.

Below is a mugshot of Harold Austin. Keep it in mind the next time you head out for some family fun. You never when a drug dealer will show up and shots will be fired at some family friendly venue. For now, you can be forewarned and know who to look for. When Paul Thurmond gets his way, you will be left in the dark again. 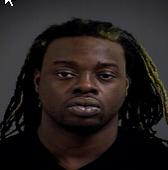 We were unable to find any tri-county general sessions court history for Maurice S. Thompson.

Austin, of 4301 Whitney Drive in North Charleston, has quite a history of drug dealing. At the time Austin was shot and charged with Conspiracy to Violate S.C. Narcotics Laws he was free on bond from charges collected in 2015 and 2014. We know, you are shocked at that information, right?

Austin’s 2015 charges consist of one count of Possession of Meth/Crack and Trafficking Meth/Crack. He was arrested February 13th and released on February 19th on a total bond of $125,000 set by Judge Linda Lombard.

When Austin was arrested in February he was free on bond on charges of Failure to Stop for Blue Lights and PWID Marijuana from November 30th, 2014. Judge Lombard set a bond of $10,000 on the failure to stop charge and gave Austin a $10,000 personal recognizance bond on the PWID charge.

Let’s examine the rest of Austin’s criminal history. You know, the stuff your elected representatives like Paul Thurmond want to hide from you.

Armed Robbery - Dismissed by the 9th Circuit Solicitor when they couldn’t get in touch with the victim.

Possession of 15 does of Ecstasy - Reduced to Possession of Ecstasy. Sentenced by Judge Thomas “Felon’s Friend” Hughston to 6 months, suspended in favor of 2 years probation and a $2,000 fine. Probation was later revoked in 2010.

PWID Ecstasy Near a School - Dismissed.

Possession of a Stolen Vehicle - Dismissed by the 9th Circuit Solicitor.

Two (2) counts of PWID Marijuana Near a School - Dismissed by the 9th Circuit Solicitor.

PWID Marijuana - Reduced to Possession of Marijuana by the 9th Circuit Solicitor. Sentenced by Judge James “Rainbows and Unicorns” Gosnell to 1 day.

Possession of Meth/Crack - Reduced to Possession of Narcotics by the 9th Circuit Solicitor. Sentenced to 1 day.