Quashon Geteris Middleton is currently an inmate at Lee Correctional Institution. He is supposed to be serving a 30 year sentence resulting from convictions on two counts of attempted murder and one count of possession of a firearm during a violent crime.

Middleton was out riding his moped on September 28th, 2010 (the mechanical kind, not one of his girlfriends) when he thought it would it would be a great idea to fire five to seven shots at the two occupants of a vehicle which was stopped behind a school bus while kindergarten age children were exiting the bus. The male passenger (a veteran of Iraq and Afghanistan) managed to cover the female driver as he jumped into her seat and drove the vehicle out of the kill zone. As he did so, Middleton and his moped were mowed down by the car. One of Middleton’s legs were shattered as a result. Yeah, we know, too bad, huh?

Just three months prior to Middleton’s attempt to kill the two occupants of that vehicle a Colleton County jury had found him not guilty of the 2009 murder charge he had been arrested for.

Judge Perry Buckner sentenced Middleton to 30 years on each of the attempted murder charges. Unfortunately, he set them to run concurrent. Considering the statements of the 14th Circuit Solicitor about how dangerous Middleton was, we have to wonder if any circuit court judge even knows what the term “consecutive” means and how to apply it in sentencing violent offenders. The five year sentence on the firearms charge was also set to run concurrent.

The reason we bring Middleton to your attention is his continued Thugbook activity from behind prison walls. That activity stretches back to 2012. You can find Middleton using the name “Fourty Middleton“. When he initially signed up for Thugbook in 2010 he used the name “Fourtygmc”, a direct reference to the violent Colleton County gang who call themselves “Get Money Cowboys”. We have come to refer to them as “The Crappy Cowboys” in our many articles on the gang. 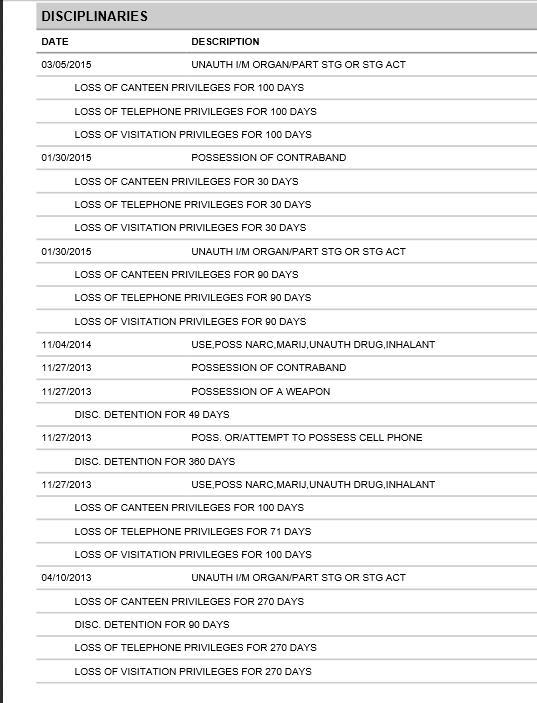 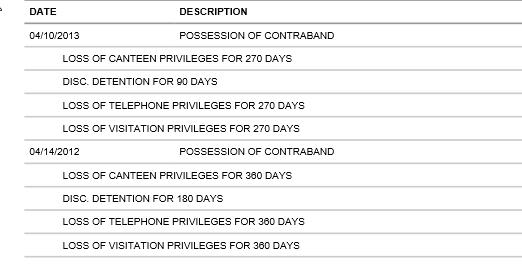 Middleton tried to appeal his sentence due to a technical error by the presiding judge. The SC Supreme Court found the judge did make a mistake in reference to one charge to the jury, but that mistake was held to be harmless and the 30 year sentence was upheld.

With such a long sentence Middleton has to have learned the errors of his ways. Right? Apparently not. Based on his disciplinary record which included administrative charges for possession of weapons, drugs, contraband and being a member of a threat group (prison speak for gang). His Thugbook page shows additional evidence of that. 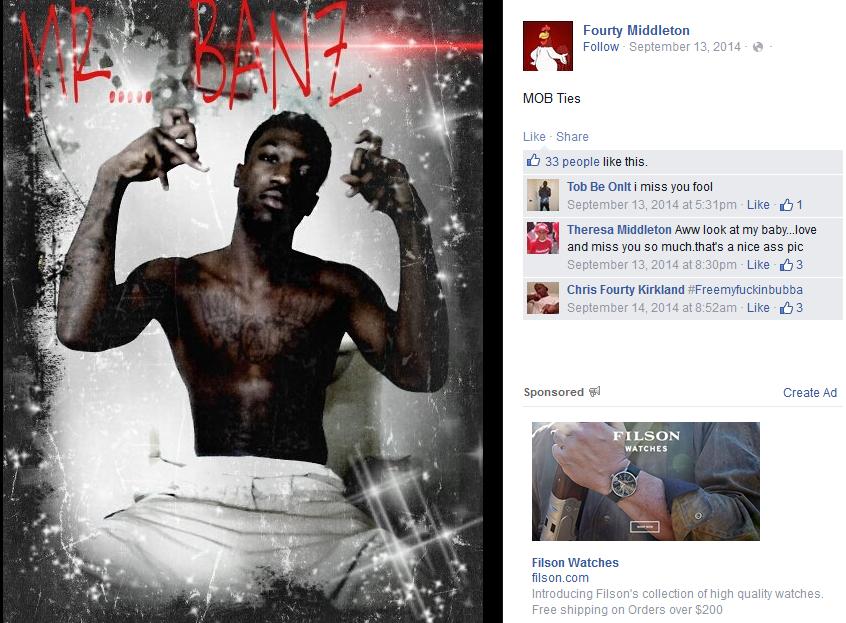 Aw, he spent another birthday in prison. He’ll be out soon, though. If you consider 2036 “soon”. 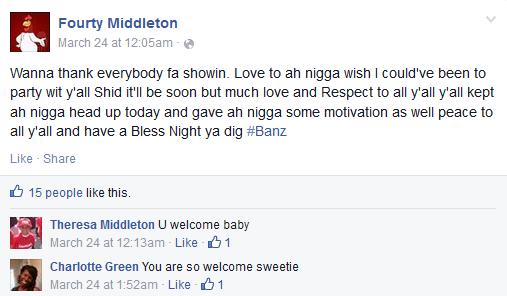 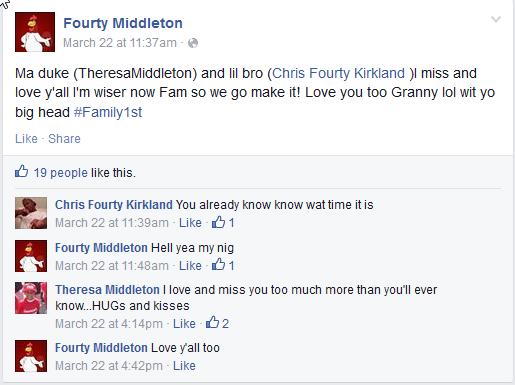 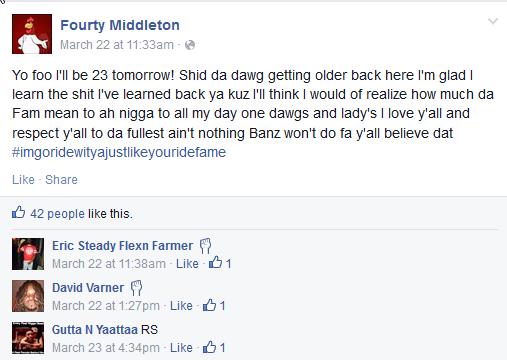 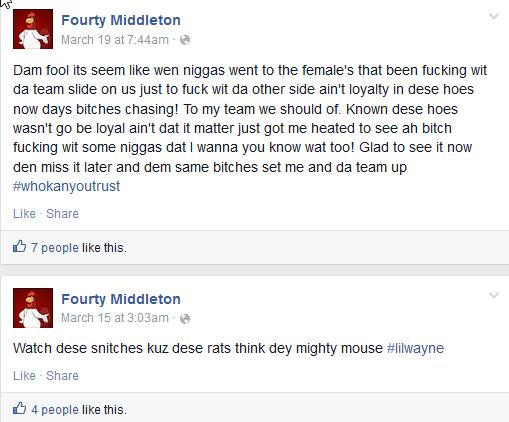 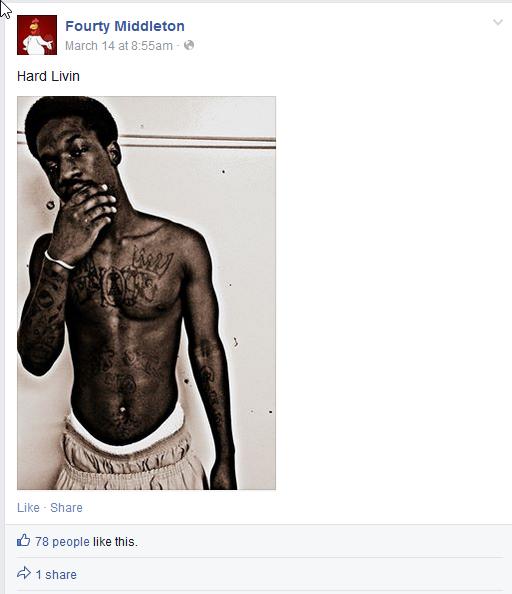 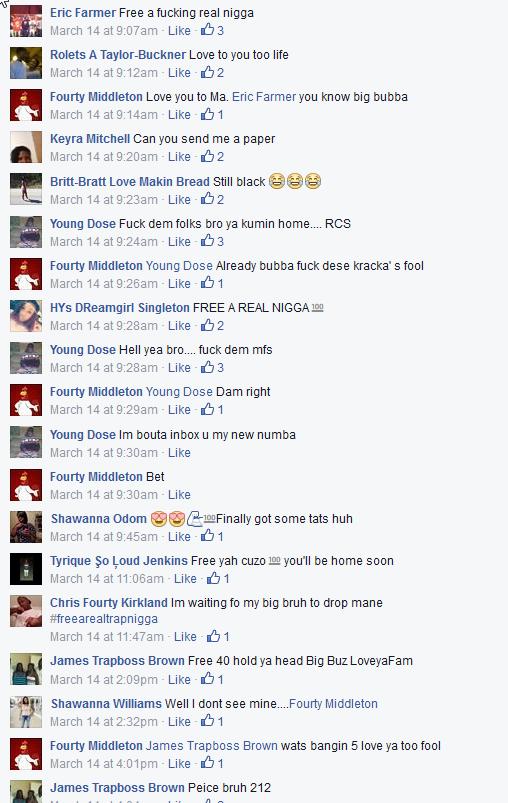 Middleton was begging for a Green Dot card just before Christmas. For those who don’t know, friends and family members buy the pre-paid cards then relay the numbers to the inmate via their illegal cell phones. Inmates then use those funds to keep the phones turned on.

Middleton sends out a threat to those he thinks did him dirty. Could this be directed at the veteran who smashed Middleton’s moped and leg?

Middleton tries to minimize his criminality. “30 years for nothing.” If by “nothing” he means firing seven shots at two people in a car stopped behind a school bus full of little kids. The only reason no one actually got shot is because Middleton’s rules of engagement followed the typical thug protocol of “spray and pray” and can’t shoot worth a damn.

And confirmation of his membership in the Crappy Cowboys.

We have, of course, reported Middleton to the folks at SCDC. Unfortunately they won’t do much to punish him thanks to their recent retreat in the face of an onslaught of lefty criminal apologists upset that convicts who continue to break the law were being punished for it.