Oh, looky there, more missed opportunities by the the solicitors and judges in the 9th Circuit to keep a serial offender off the streets and the public safe. Whodathunkit!?

We are speaking, of course, about Sylvester Desmond Scott. He was charged with the March 4th robbery of the First Palmetto Savings Bank on Sumar Street in Charleston. So far, Scott has been charged with Armed Robbery and Possession of a Weapon During a Violent Crime. No bond has been set on the former, a bond of $50,000 was set on the latter charge. Rumor has it he may be charged with additional robberies.

You know, right after reading this story on various local media sites we were treated to some wonderful comments from Charleston area racists on the case of the teenage murder suspect who was released on bond yesterday. The usual suspects claim the suspect was only released on bond because he is white and his parents have money. Apparently they have chosen not to notice what we have been pointing out in these pages for almost three years now - our system is broken. The racists conveniently fail to acknowledge people like Sylvester Scott, one of many suspects, black and white, who are consistently released by bond judges, solicitors and circuit court judges to visit even more violence on the citizens of the Lowcountry.

Of course, our bond laws play a huge part in that, too. The fact that an accused criminal can bond out by paying a ridiculously low amount of the bond to a bonding agent and finance the rest of the ten percent is nothing short of ridiculous. Our system, from bond court to prison term, has only one goal - releasing criminals back to the streets. Sylvester Scott is just the latest example of hundreds we have provided you over the years.

Want to guess what happens when a defendant decides to stop making his payments to the bonding agent? Can they put him back in jail? Not in South Carolina. Failure to pay the amount agreed upon to the bonding agent is NOT a valid reason for a bondsman to step away from a bond. Yes, you read that right. Too bad they don’t apply the same rule to the car you just financed, huh? Make a few payments, stop paying and the finance company can’t touch you. How great would that be?

Then again, you may not be a criminal and our system is designed to coddle criminals and leave you to fend for yourself as best you can. Don’t believe it? Keep reading as we go through Scott’s criminal history in Charleston County. This saga will take you through the administrations of at least four different 9th Circuit Solicitors.

When we reviewed Scott’s history we found well over 50 arrests, including the magistrate and municipal court offenses in the various jurisdictions in Charleston County. What becomes obvious, yet again, is the police are doing their job, but the system lets them down time and time again. And the system lets you down. But, you are expected to be too busy to notice, keep quiet if you do, and keep paying those taxes.

Possession of a Stolen Vehicle - Dismissed by the 9th Circuit Solicitor.

Assault on a Police Officer - Reduced to simple Resisting Arrest by the 9th Circuit Solicitor. Sentenced by Judge Harwell Hicks to 1 year, suspended in favor of 3 years probation.

B&E Motor Vehicle - Dismissed by the 9th Circuit Solicitor with the notation, “Defendant received prison sentence on other charges”.

3rd Offense Shoplifting - Plead guilty. Sentenced to 5 years, concurrent with the sentence above.

2nd Degree Burglary - Plead guilty. Sentenced by Judge Victor Rawl to 5 years, concurrent with the sentences for the 1997 charges.

Grand Larceny - Same sentence as above.

After serving less than 3 years of that 5 year sentence, Scott was out and committing more crimes.

Because probation is highly effective. Right? 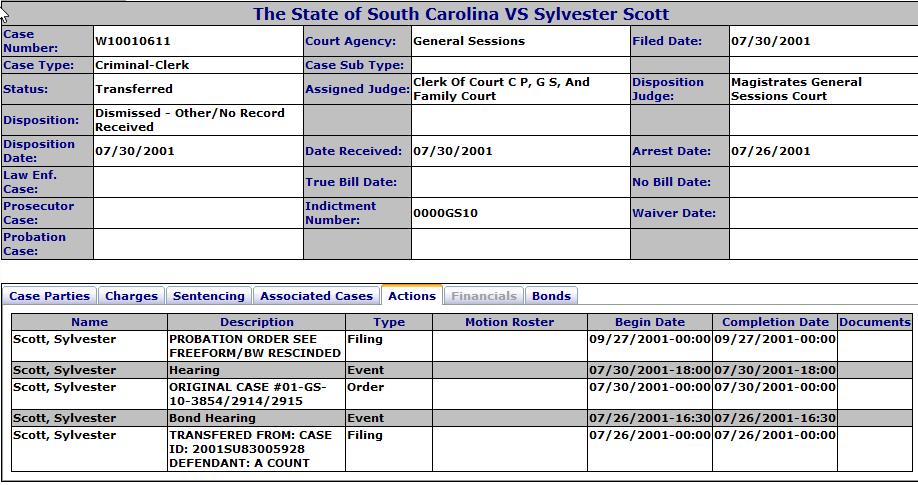 Assault on Police While Resisting Arrest - Plead guilty. Sentenced by Judgge Daniel Pieper to 1 year, suspended after 6 months and 1 year of probation.

Scott didn’t do much of that three year sentence. He was charged with another probation violation in 2005. Probation was revoked. 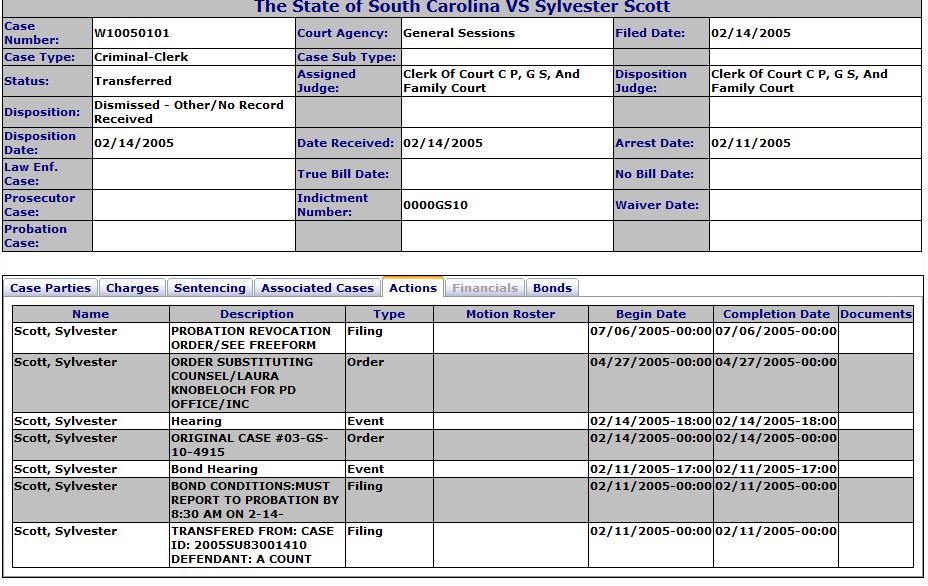 Possession of Burglary Tools - Dismissed by the 9th Circuit Solicitor.

Armed Robbbery - Dismissed at the preliminary hearing due to “no probable cause”. Hmmmm…..

Scott was charged with robbing at least two banks in 2009. One of those cases was locked in by DNA evidence. He was sentenced to 12 years in January 2014. According to the public record Scott spent 49 months (just over 4 years) in jail awaiting the outcome of those cases.

While Scott was awaiting trial he was charged with another 2nd Degree Burglary in 2011. He plead guilty to that charge and was sentenced to 8 years by Judge Roger Young. He began that sentence in May of 2011.

Even though Scott was sent to prison on the burglary charge, he apparently got credit for that time on the bank robbery charge. Scott only served approximately 5 years for both of those convictions with sentences totaling 18 years before he was released. Do the math. Arrested in June of 2009, doesn’t make bond, sentenced to 8 years in 2011, 12 years in 2014 and here it is early in 2015 and he’s roaming the streets and robbing businesses yet again.

Whenever you hear politicians or prosecutors talk about truth in sentencing, you need to call them on that bullshit

By the way, Sylvester Scott was out on bond while committing these robberies. Shortly after his release from prison at the end of 2014 he was charged with Trafficking Heroin and Possession of Cocaine. Judge Linda Lombard handed down a total bond of $275,000. Scott bonded out of jail on 28 January.

We find it amazing that any bonding company would take on a defendant like Scott, a recently released convict with no collateral, not even a pot to piss in to his name, and risk $275,000 on him. Maybe he had some heroin cash stashed and they didn’t have to finance his bond.

Can one of the racists complaining about white people getting out on bond please explain this? How about the white kid from Mt. Pleasant with no previous arrest record who has served 8 years of a ten year sentence for armed robbery while Sylvester Scott, a convicted serial felon serves only 5 years of a 12 year sentence? Care to comment on that?

Until you racists get beyond your straw man issues and red herring arguments and realize where the true problem lies, nothing will change.