And another serial violent offender was jailed last night. Ronald Michael Pye took a trip to the SACDC on charges of Attempted Murder, 2nd Degree Assault & Battery and Possession of a Weapon (knife) During a Violent Crime. No bond was set on the attempted murder charge. A total bond of $100,000 was set on the other two charges.

Pye is said to have held his girlfriend close to or in a fire, thereby causing serious burns. When the woman’s son intervened he was stabbed in the chest by Pye.

We thought his post from Sunday afternoon was interesting. 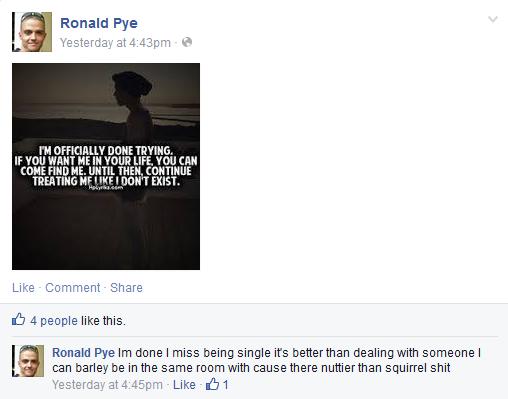 Some of the “news” outlets attempted to give you background on Pye, but it was woefully insufficient. We will give you more information.

Assault & Battery With Intent to Kill - Reduced to Assault & Battery of a High & Aggravated Nature. Sentenced by Judge Luke Brown to a YOA term of unknown length, suspended in favor of 2 years probation.

ABWIK - Found guilty by a jury at trial. Sentenced by Judge Costa Pliecones to 9 years, suspended after 27 months and 5 years probation.

Possession of Cocaine - Plead guilty. Sentenced by Judge Roger Young to 1 year, suspended in favor of 1 year of probation.

Failure to Stop for Blue Lights - Pending. Was free on a $6,000 bond set by Judge James Polk.

As you can see, there is quite a bit more violence in that criminal history than the “news” outlets would have you believe. Anyone else smell some more probation coming down the pike?