The Depths of Union Heights

Today we will plumb the depths of Union Heights, a neighborhood in the South end of North Charleston known for violence and drug dealers.

Sometimes all it takes to launch us on a research mission is a social media post like the one above. When we saw this post on the Twitter feed of Joel Spillers and friends we decided to find out why he wants all members of the North Charleston Police Department shot in the face. Spillers’ distress and violent tendencies were apparently triggered by authorities rounding up a bunch of Union Heights drug dealers and CTL alumni. You can find Joel Spillers under the name “Hikeboy Joel“. 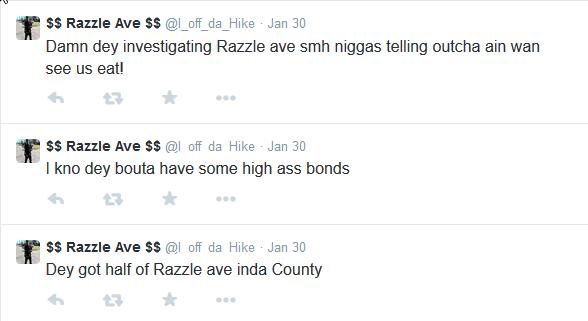 It looks like at least eight denizens of Union Heights were incarcerated recently. We have identified seven of the eight in the collage put together by Spillers. 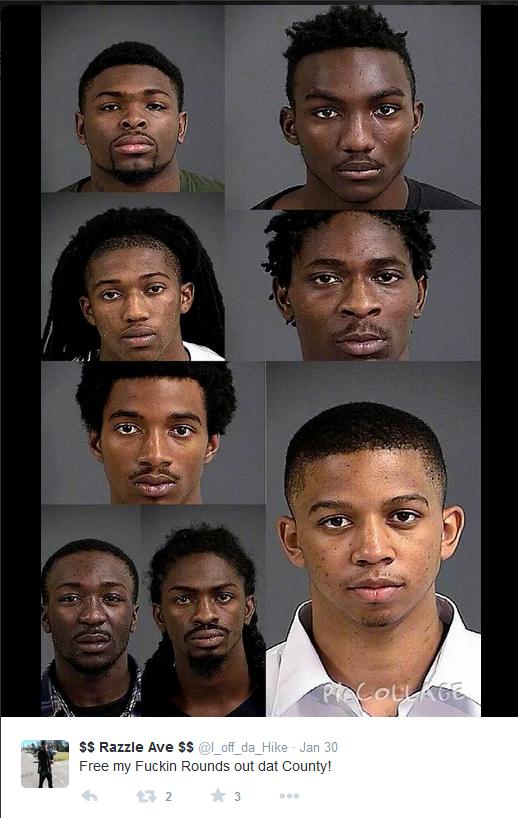 Joel Spillers pal, Rajon, aka “Razzle Ave” on Thugbook, was feeling pretty good about himself earlier this month and seemed secure in his tiny little open air drug market neighborhood. Now, not so much. 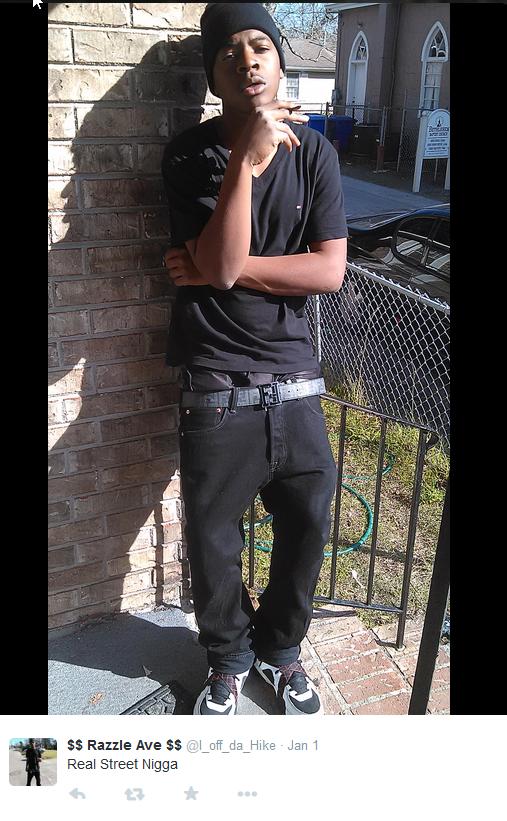 It would appear that just as the thug roundup was getting underway some were advertising he was in possession of some narcotics. Too bad the cops missed him.

Let’s take a look at the seven drug dealers we have identified. We will start with CTL alumni Keno Sherman.

We first profiled Keno Sherman in February 2013 in our article on the Young Goons. 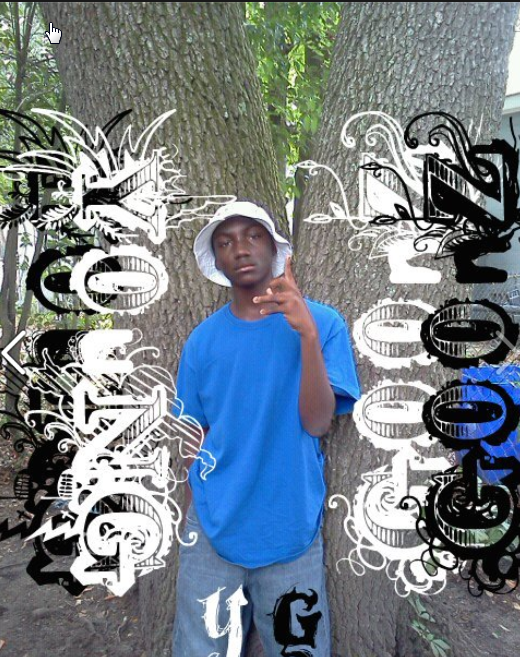 Sherman, lately of 2212 Hampton Avenue and 3442 Cochise Street, was arrested on 29 January and charged with PWID Marijuana, Distribution of Crack and Unlawful Carrying of a Firearm. His total bond was set at $135,000.

Judge Linda Lombard set a high bond on the gun charge because Sherman has a gun charge pending from January 2014. Judge Lombard released him on a $50,000 personal recognizance bond on that charge. Sherman failed to appear in court and a bench warrant was issued on 19 September. That bench warrant was recalled on 26 September and Sherman was allowed to remain free on his PR bond.

If you go searching through the databases you will find another Keno Sherman who was born in 1978. We believe this might be the younger Keno Sherman’s father. That older Sherman is a serial drug offender who is currently incarcerated on a charge of Trafficking Cocaine.

Next up is Devonte Reid, of 69-G Stuart Street in Charleston.  He goes by the Thugbook name “Gusto Slim“. His criminal history is in the Charleston County database under the name “Davonte”. He was charged this time around with PWID Marijuana, Distribution of Crack and Unlawful Carrying of a Firearm. He received the same total bond of $135,000.

Reid is on probation, but based on our experience with SCDPPS lately, don’t expect to see him charged with a probation violation for these latest charges.

Distribution of Crack - Reduced to Possession of Crack by the 9th Circuit Solicitor. Sentenced by Judge Roger Young to a YOA term not to exceed 6 years, suspended in favor of 2 years probation.

Distribution of Crack Near a School - Dismissed by the 9th Circuit Solicitor.

Distribution of Crack - Plead guilty. Same sentence as above, concurrent, of course.

Failure to Stop for Blue Lights - Dismissed by the 9th Circuit Solicitor.

Next up is “LilKris Mitchell“, real name Kristipher Mitchell of 1995 Delaware Avenue. He was hit with the same three charges as the two above. His total bond was set at $70,000 due to his lack of an adult criminal history.

Daquan Archield, aka “Mechie Floyd“, of 2237 Birdie Garrett Street, was hit with the same three charges and received a total bond of $135,000. Archield is a member of a family that has been dealing drugs and engaging in violence for decades in Union Heights.

Daquan Archield was charged in 2010 with Possession of Crack. The 9th Circuit Solicitor dismissed the charge in 2012. Apparently the charging officer didn’t read Archield’s rap sheet before typing up the charges. As you will see below, this would be Archield’s second offense.

Possession of Crack - Dismissed by the 9th Circuit Solicitor.

Devante Archield, aka “Veez No Sleep“, of 2630 Madden Drive, is another of the individuals in Spillers’ thug collage. This Archield was arrested in November of 2014 on three counts of Distribution of Heroin The record at SACDC indicates possession of heroin, but that information is wrong. His total bond was set at $300,000.

Possession of Crack/Meth - Dismissed by the 9th Circuit Solicitor.

Devante Archield was also arrested in January of 2014 while out on bond for his pending 2013 charges. He was charged with Distribution of Crack and freed on a $25,000 bond.

To date, there has been no effort to revoke Devante Archield’s bonds from 2013 or January 2014 in light of his latest arrest on 3 charges of heroin distribution.

As you can see from the record below Johnson is on probation for 2013 charge of Distribution of Crack Cocaine. He plead guilty to that charge in September 2014 and was sentenced by Judge George James to 18 months, suspended in favor of 18 months probation. Given that conviction, the actual charge in this incident should be 2nd Offense Distribution of Crack. Someone still isn’t reading those rap sheets very well.

Who wants to bet whether or not this latest arrest will result in a probation violation charge? Don’t count on it. Sad to say, but SCDPPS has been run into the ground over the past few years. 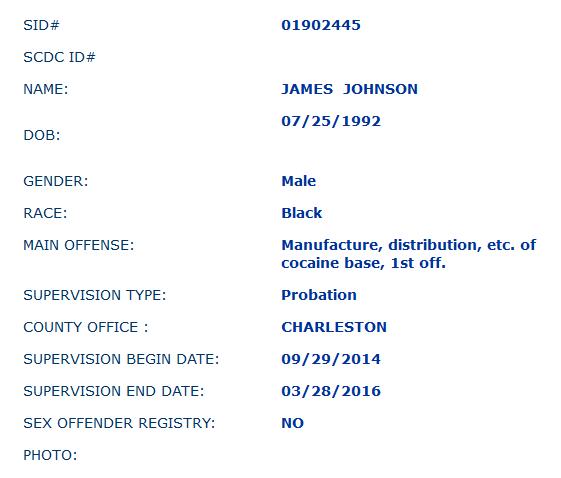 The seventh member of the Union Heights collage put together by the helpful Joel Spillers is Corrie Antonio Jenkins, aka “Oneway Hikelife“, aka “Mousey”, of 2237 Birdie Garrett Street. He was locked up on 18 January on charges of 1st Offense Distribution of Crack, Unlawful Carrying of a Firearm and Possession of a Stolen Firearm. His total bond was set at $200,000.

As you can see below, the 1st offense distribution charge against Jenkins is wrong. It seems there are a lot of cops not reading those rap sheets before drafting their warrants. In 2011 Jenkins was convicted of 1st Offense Distribution of Crack and sentenced by Judge Stephanie McDonald to YOA term of zero to five years, suspended in favor of one year of probation. A charge of PWID Crack was dismissed by the 9th Circuit Solicitor.

Jenkins was charged in November 2014 with 2nd Offense Criminal Domestic Violence. The 9th Circuit Solicitor, who apparently ain’t got time for that despite what she says in the press, kicked it down to magistrates court. The case appears to be pending.

Even with all of these dealers in jail we doubt the heroin and crack cocaine trade in Union Heights has slowed down any.

Adding up all of the gun charges brings our tally to: