Residents of Sangaree have been experiencing a lot of burglaries in the past few weeks. At least nine suspects have now been rounded up, but we suspect there might be more. 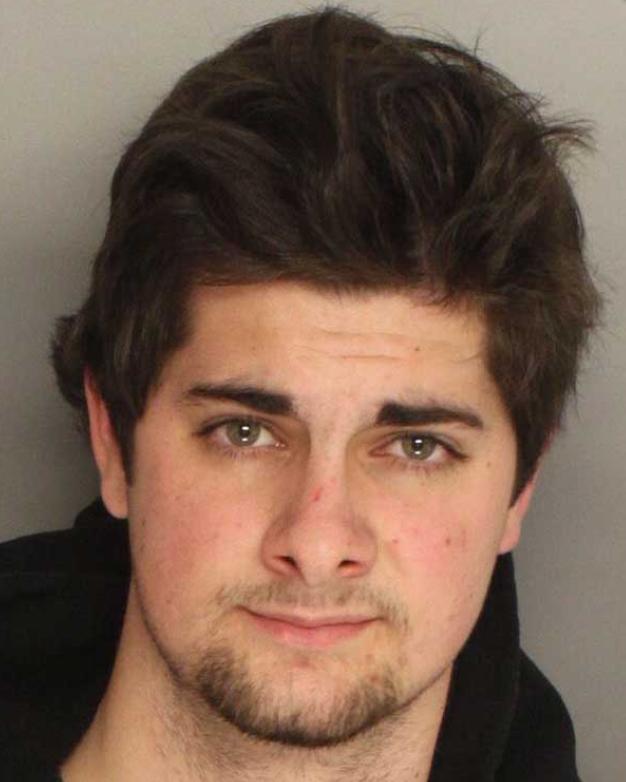 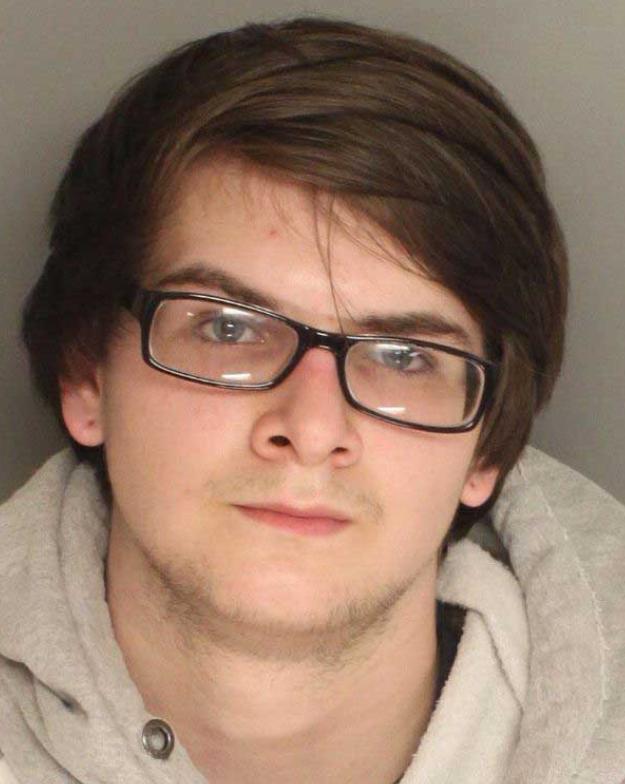 Also charged were two juveniles, a 16 year old and 15 year old. Based on social media posts we have one of those is Noah Riley. Note the entry where he says, “News articles saying we were connected to other break ins which is complete bullshit.” 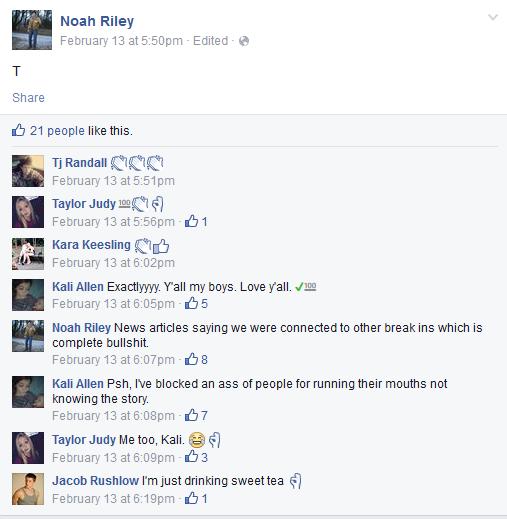 At least some of these thieves self-identify with the Gangster Disciple/Folk gang. In the picture below you see Brandon Holloway with his pal Josh Crouch of Pierre Court. 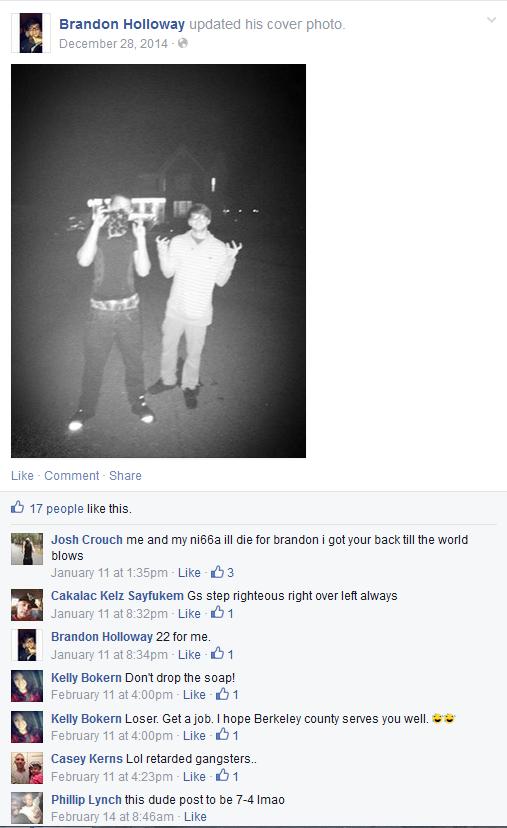 Riley and Holloway were each charged with two counts of 1st Degree Burglary. Judge James Polk set a total bond of $45,000 for each and they were released the same day.

Citizens tell us that while the raid associated with these arrests was happening there were to more burglaries half a mile away. As a result, the residents of Sangaree knew there were more suspects involved.

On 13 February we learned of the arrests of Justen Gee and Robin Nicole Snyder on property crime charges. The wonderfully uninformative Chief Deputy Ollic tells us this arrest was related to a major theft ring, but he didnâ€™t specify whether it was related to the Sangaree burglaries or these guys arrested a couple of weeks ago.

Either way, letâ€™s dig into their histories and see who is to blame for them walking the streets and stealing stuff belonging to other folks. 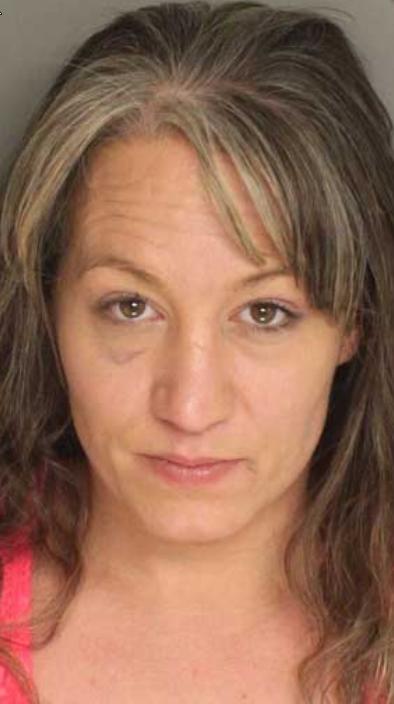 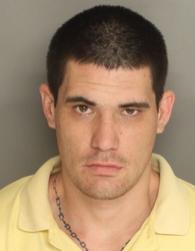 Letâ€™s start with Robin Nicole Snyder of 103 Broken Trail. She was charged with Obstruction of Justice after the police pursuit of the couple and their stolen vehicle. She was released by the kindly Judge James Polk on a $5,000 personal recognizance bond. We wonder if Judge Polk offered her a possible defense to her charges.

Judge Polk let Snyer go on that P.R. bond even though she is already free on bond on 2014 charges in Berkeley County for PWID Marijuana, Possession of Meth and Shoplifting.

The 9th Circuit Solicitor dismissed a charge of Possession of a Stolen Vehicle for Snyder in 2012.

In 2006, the 9th Circuit Solicitor dismissed a Charleston County charge of Assault & Battery With Intent to Kill claiming the case was “missing an essential element”. We wonder what was missing - the assault, the battery or the intent to kill.

Snyder also has a ton of bad check charges and traffic charges. We are noticing lately that females seem to have an even easier time in the 9th Circuit than the male thugs.

The 9th Circuit Solicitor had even more chances to put an end to the activities of serial offender Justen Gee, of 1101 Limehouse Lane.

Gee is currently charged in Berkeley County with two counts of Grand Larceny, one count of PWID Cocaine and PWID Cocaine Near a School. Judge James Polk set his total bond at $100,000.

In 2012 Gee was charged in Charleston County with Possession of a Controlled Substance. Judge James Gosnell sentenced him to 1 day time served.

In February of 2013 Gee was charged in Berkeley County with Strong Arm Robbery. He plead guilty Judge G. Edward Welmaker sentenced him to 12 years, suspended on 8 months time served and 40 months of probation. That sentenced was handed down in July of 2014.

Two weeks after being put on probation in Berkeley County, Gee was arrested in Charleston County and charged with Grand Larceny. He plead guilty in September of 2014 and Judge Thomas “Felonâ€™s Friend” Hughston sentenced him to 5 years, suspended on 30 days time served and 2 years probation.

Five days before the Felonâ€™s Friend put Gee on a 2nd probation he was charged in Charleston County with Possession of a Controlled Substance. Even though Gee failed to appear in court and a bench warrant had to be issued, the 9th Circuit Solicitor dismissed the charge on 17 September, 2014. 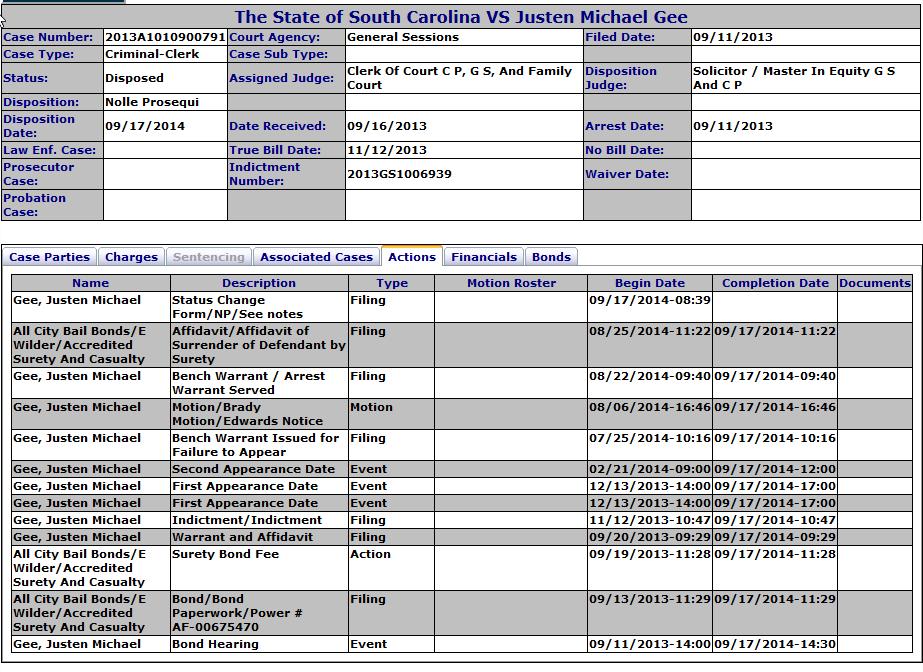 Note there were no attempts whatsoever to file any probation violation charges on Gee for these offenses committed while on probation. Are you folks starting to get a handle on just where the problems lie in our criminal justice system? Oh, wait. All that was probably just a fluke. Letâ€™s check out a couple of more serial crooks and see how the 9th Circuit did with them.

Now we get word that five additional suspects have been arrested in the Sangaree burglary ring. Letâ€™s run through that group, starting with the oldest. 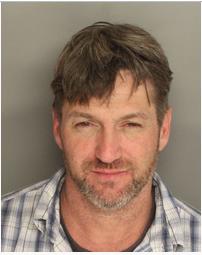 Robert Markussen, of 504 Amy Drive, was charged with two counts of Receiving Stolen Goods and two counts of Possession of Burglary Tools. His total bond was set at $80,000.

Possession of Crack - Plead guilty. Sentenced by Judge Diane Goodstein to 3 years, suspended in favor of 3 years probation. That probation was later terminated.

PWID Crack Near a School - Dismissed by the 1st Circuit Solicitor.

Possession of a Weapon During a Violent Crime - Dismissed by the 9th Circuit Solicitor.

Possession of a Firearm by a Convicted Felon - Dismissed by the 9th Circuit Solicitor.

Two (2) counts of Exposing a Child to Meth Manufacturing - Dismissed by the 9th Circuit Solicitor.

Disposal of Methamphetamine Waste - Plead guilty. Sentenced by Judge J.C. Nicholson to 2 years and given credit for 312 days time served. This sentence amounted to an immediate release from jail.

As you can see, the 9th Circuit Solicitor dropped five very serious charges in exchange for a guilty plea to the least serious charge. Thatâ€™s just how they operate there.

Next up is Thomas Fox ofÂ  2405 Eagle Drive in North Charleston. He also has a criminal history involving narcotics and is currently on probation. Big surprise there, huh? 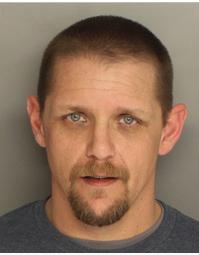 Fox was charged in 2010 with Possession of Narcotics. That charge was dismissed by the 9th Circuit Solicitor in 2011.

Possession of Narcotics - Plead guilty. Sentenced to 2 years, suspended to 6 months and 2 years probation. The Judge game Fox credit for 113 days time served, even though Fox only served 3 days before he made bond.

Possession of Methamphetamine - Plead guilty. Sentenced to 3 years, suspended on 6 months and 2 years probation. All concurrent, of course. Fox was also given credit for 113 days on this charge even though he was given a PR bond and released the same day he was arrested.

That 9th Circuit math must be based on that common core bullshit.

Another member of the burglary ring is Jordan Gee, of 518 Woodward Boulevard. Yes, he is related to Justen Gee. 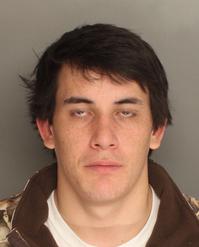 Jordan Gee was charged with four counts of 2nd Degree Burglary. Judge Polk set his total bond at $20,000. Hey, it wasnâ€™t his house the maggot was breaking into.

In 2013 Jordan Gee was charged with Strong Arm Robbery. The 9th Circuit Solicitor dismissed that charge.

In 2014 Gee was charged with Possession of Narcotics and PWID Marijuana. He plead guilty to the narcotics charge and was sentenced by Judge W. Jeffery Young to 2 years, suspended in favor of 18 months of probation. The 9th Circuit Solicitor dropped the PWID charge to a simple possession charge and Gee was given 30 days, suspended on time served.

We pulled up Geeâ€™s probation case and discovered he is supposed to be serving his probation in Lexington County. Another stellar job of supervision by the Department of Probation and Parole. 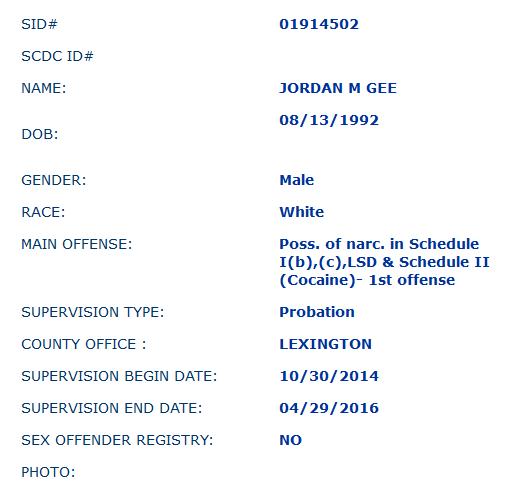 While the SCPPS site shows Geeâ€™s probation ends in April of 2016, the data at the Vinelink site says the probation case is closed.

Christopher Mather, of 315 Arrowhead Drive, was charged with two counts of 2nd Degree Burglary and one count of Possession of Heroin. Total bond was set at $95,000. 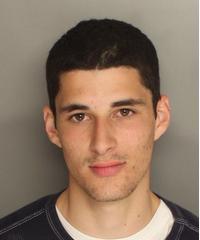 In 2009 Mather was charged with Malicious Damage to Property (Vandalism), Pointing & Presenting a Firearm and Unlawful Possession of a Firearm. He plead guilty to vandalism and was sentenced to 14 days by Judge Kristi Harrington, The pointing and presenting was dismissed and a guilty plea to unlawful possession of a firearm resulted in a YOA sentence not to exceed 5 years, suspended in favor of 18 months probation. 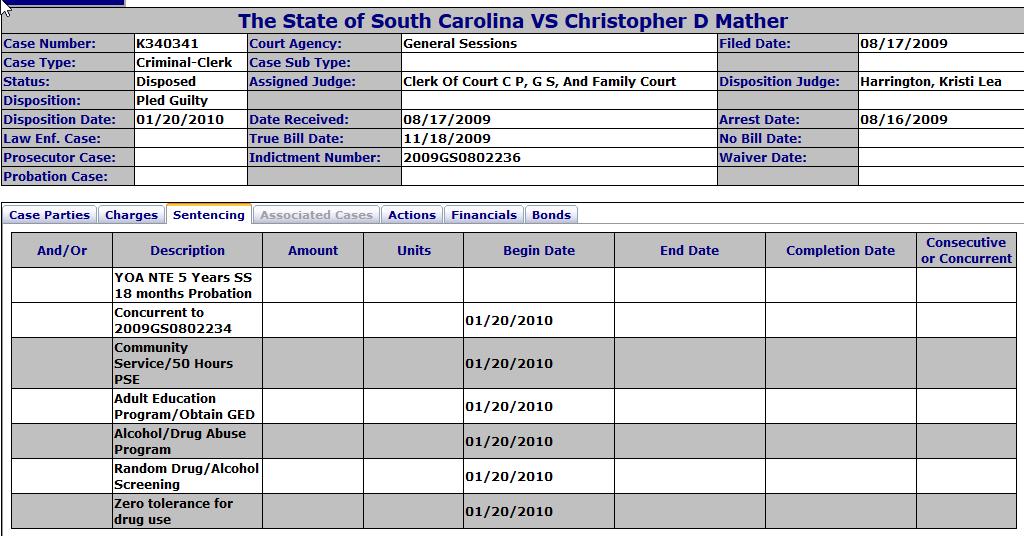 The last person arrested is Erin Jones, also of 315 Arrowhead Drive. To date she has only been charged with Possession of Heroin. She has no prior general sessions history and was given a $10,000 personal recognizance bond. You might be inclined to think she just got caught up in the raid, but we should point out she shares a residence with her boyfriend, Christopher Mather. Kind of hard to miss other peopleâ€™s property coming through your home. 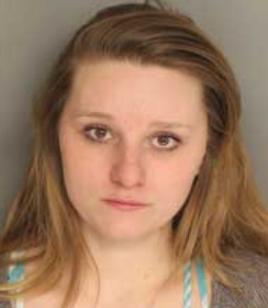 This group brings our gun crime tally for the 9th Circuit to: