Jenkins has a criminal history in Charleston County dating back to 2007.

Unlawful Carrying of a Pistol - Dismissed by the 9th Circuit Solicitor.

Possession of a Stolen Pistol - Dismissed by the 9th Circuit Solicitor.

Possession of a Pistol by a Minor - Pled guilty. Sentenced by Judge R. Markley Dennis to 4 years, suspended on time served and 4 years probation.

Summary: Two gun charges dismissed in order to get a guilty plea to a third.

Probation Violation - Revoked. Since Jenkins was only 17 at the time he must have been on probation for a juvenile conviction. Nice of the judge to put him back on probation, huh? 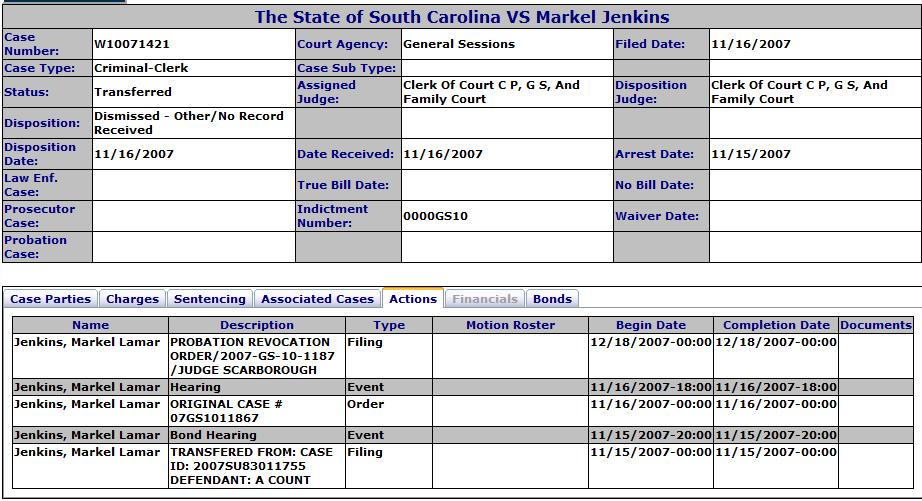 Jenkins was arrested in 2009 on a charge of Possession of Crack while he was on probation for the gun charge. Judge Thomas “Felon’s Friend” Hughston sentenced him to 63 days time served. No probation violation was ever filed.

While awaiting a disposition on the assault charge from 2012 Jenkins was charged with Interfering with a Fire Alarm Box and Malicious Damage to Property at the Sheriff Al Cannon Detention Center. Judge Coker sentenced him to 30 days each, concurrent, which was served while Jenkins was serving time for the assault charge.

What a great system we have. You can keep racking up charges while other charges are pending and not have to do any additional time for those additional charges.

This brings our 9th Circuit Solicitor gun charge totals to: