Cold But Not Forgotten

Cold but not forgotten. Unsolved cases, that is.

North Charleston Police have cleared the 15 year old murder case of Edwina Patricia Shelton. Her badly beaten body was found against a chain link fence behind an apartment on Cosgrove Avenue, nude from the waist down. She was found at 7 a.m. on a December morning in 1999 by a resident of a house next door to the apartment.

We have been contacted by a couple of retired investigators who provided some very interesting details about this murder. We have been asked to refrain from publishing those details pending the outcome of the case. As usual, we made a promise to those folks and we intend to honor it. In return, one of those retired investigators has promised to write a guest article about the case once it is done winding itâ€™s way through the system.

Those investigators fully expect the 9th Circuit Solicitor to eventually dismiss the murder case. Considering that Anthony Andrew Heyward is already doing life without parole we donâ€™t expect Scarlett Wilson to pursue this case with any vigor. Unless she goes for the death penalty we donâ€™t see a lot of sense in throwing away taxpayer dollars. 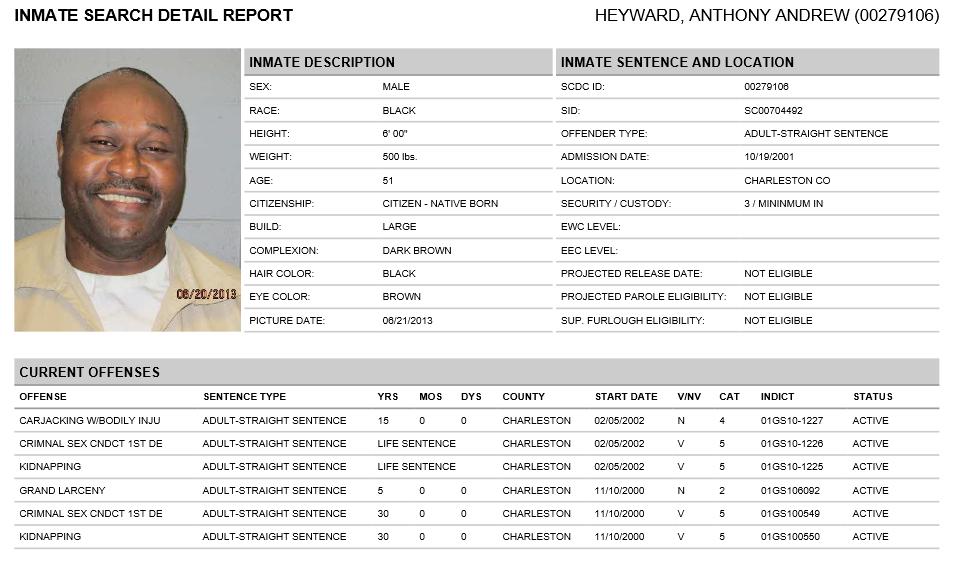 See, they never have taken that charge seriously.

Threatening the Life of a Public Official - Plead guilty. Sentenced by Judge Gerald Smoak to 1 year, suspended on time served.

Breach of Trust Motor Vehicle - Dismissed by the 9th Circuit SolicitorÂ  (Schwacke?) two years later with a variety of excuses - “lack of prosecutive merit, being prosecuted on more serious charges”.

Note: Quite a few of these charges were dismissed with leave to restore with the notation “prosecuted on other charges”.

Use of a Vehicle Without Permission - Dismissed.

1st Degree Criminal Sexual Conduct - Found guilty by a jury. Sentenced by the Felonâ€™s Friend to 30 years. Yeah, we know - what a shock!

Possession of a Stolen Vehicle - Dismissed.

Kidnapping - Found guilty by a jury. Sentenced to 30 years, concurrent.

Carjacking - Found guilty by a jury. Sentenced to 15 years.

The above charges resulted from Heyward raping four women and carjacking another. Strange that this serial rapist didnâ€™t make the news back then.

Note: These charges were dismissed in 2001 due to Heyward doing life without parole on charges listed above.

The 2001 charges stem from the rape and murder of 35 year old Willie Mae Bennett. Her body was found at Bulowâ€™s Boat Landing after Heyward raped her, stole her car and ran over her several times.

Even while we congratulate NCPD for sticking with this case and ultimately solving it, the questions we feel compelled to ask are these. Given the evidence of Heyward being a violent serial rapist, was any information shared between area law enforcement agencies regarding Heyward and his activities? If so, it seems Sheltonâ€™s case could have been solved that much quicker even though DNA evidence processing was not as advance as it is today. Was he ever considered a suspect prior to this recent DNA hit? Has Heyward been looked at in any other unsolved murders of women from the 1980â€™s and 1990â€™s?

We saw Sheltonâ€™s daughter on the news tonight and share her satisfaction that the killer has been caught. We just hope she is aware there will probably never be a trial. Our first instinct, and probably yours, is to say, “Take it to trial.” However, the reality of the situation is that it would really make no sense to do so with Heyward already serving a life sentence. The familyâ€™s may only be able to take comfort in finally knowing who killed Edwina Shelton.