Local news agencies recently reported Phillip Simoneaux was arrested by Probation and Parole agents who found child pornography on the computer at his home on West Dolphin Street in North Charleston. It was also reported that Simoneaux was charged with Sexual Exploitation of a Minor by NCPD. If that is true, he was apparently never entered into the booking database at the Al Cannon Detention Center and his charges were never entered in the Charleston County Clerk of Court database. WCSC reported bond was set at $250,000 and Simoneaux paid it and was released. 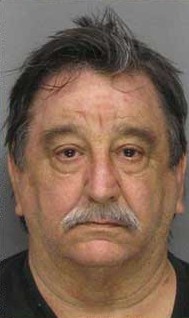 Here is the entry from his probation violation on 27 June. It looks like Judge Bligen set his bond at zero dollars and Simoneaux was released on 28 June. It also looks like another probation warrant was issued on 3 July.

Simoneaux was charged with 1st Degree Assault With Intent to Commit Criminal Sexual Conduct in February of 2012 in Richland County. The charge stemmed from the sexual assault of a young girl years ago.

Simoneaux was also charged with 2nd Degree Criminal Sexual Conduct with a Minor for that same incident. The 5th Circuit Solicitor reduced the charge to 2nd Degree Assault & Battery after badgering the victim for two years and dismissed the other charge. Judge R. Ferrell Cothran sentenced Simoneaux to three years, suspended on two days time served and two years of probation and required him to register as a sex offender.

The interesting thing about this case is that the victim actually had a tape recorded telephone conversation with Simoneaux in which he basically admitted the molestation and that “he did a lot of things to a lot of people”. Yet the 5th Circuit Solicitor chose to ignore the wishes of the victim, who turns out to be very outspoken, as all victims should be. As a result of that, the victim was constantly chastised and ridiculed by the 5th Circuit Solicitor for being difficult.

We had planned to write an in-depth story on that case and the problems with the 5th Circuit Solicitor, but we haven’t had a lot of time and the case is very involved. Instead, we reached out to the victim and she agreed to write an article about the shabby treatment she received which we would publish here. We are waiting on that article to arrive and will publish it as soon as we receive it.

Just to give you a taste, here is a screen cap of her reaction to this latest arrest. 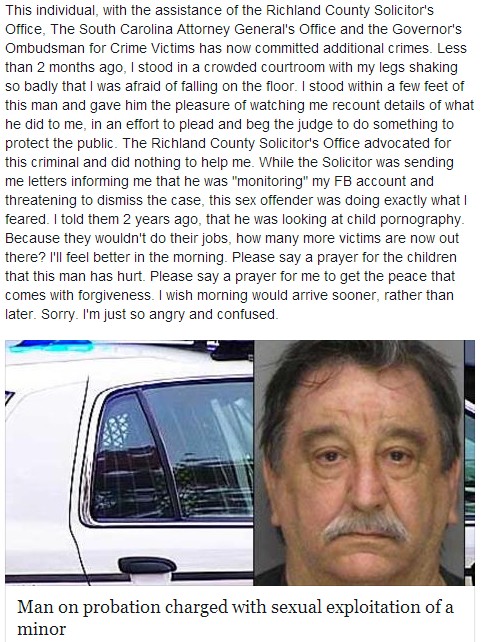 The 5th Circuit Solicitor was “monitoring” her Facebook. We’ve seen the letters, folks. As we have seen with 9th Circuit Solicitor Scarlett Wilson, those folks don’t like it when they get criticized for job performance and will issue personal attacks on the citizens and constituents who dare to do it.