We are generally fans and supporters of the Electronic Frontier Foundation (EFF), but they are way off base in this article about the South Carolina Department of Corrections punishing inmates for accessing social media accounts via illegal cell phones while behind bars. EFF seems to ignore the extremely pertinent fact that the only way these inmates can access social media is by using cell phones which are prohibited to inmates. The EFF also tries to imply that all of the inmates are being punished for having a friend or family member on the outside administer and post to their social media accounts for them. Nothing could be further from the truth. EFF cries about investigators using fake Thugbook accounts to catch some offenders and refers several times to violations of Facebook’s terms of service as if those terms of service carry more weight than an actual law. Of course, they only complain about SCDC violating those terms, not the inmates. These folks need to get a grip.

Other than the many misrepresentations in the article, we here at Charleston Thug Life were a bit peeved to discover SCDC had actually paid some person or firm $12,500 to help them out with finding inmate pages. And here we are doing it for free. Hey, SCDC, step up and do the right thing why don’t ya! For that kind of money we would concentrate almost exclusively on inmates and we are willing to bet we are better at it than whoever you already paid. Imagine how great this site could be with that little bit of money invested into servers and writers.

The EFF article whines about inmates like Tyheem Henry being administratively “sentenced” to 13,680 days (37.5 years) in solitary confinement for his 38 insignificant posts to his Facebook account from behind the walls of Lee Correctional Institution. Henry was one member of a gang who beat Carter Strange nearly to death in Columbia in June of 2011.  When we first profiled Henry it started a very public war between the administration in charge of SCDC at the time and Charleston Thug Life. We ultimately offered up an olive branch (as we did repeatedly before SCDC started the war). That offer was accepted by the new administration at SCDC. We haven’t had much time to work inmates lately, but when we do find one we provide SCDC with the necessary information and they take action.

We published that first article on Tyheem Henry on 8 September, 2013. By 10 September SCDC had managed to have his page deleted. They moved with great alacrity on that one because Henry’s case was extremely high profile and the “news” media picked it up after we broke the story. Up to that point we were profiling inmates three or four times each and nothing was being done. EFF also forgot to mention that SCDC seized the illegal cell phone Henry was using to post to his Thugbook account. Ta-da!

Let’s review some of those harmless posts Henry made to his Thugbook account from prison using his illegal contraband cell phone.

In this first posts Henry gives a shout out to his fellow Folk/Gangster Disciple gang members. 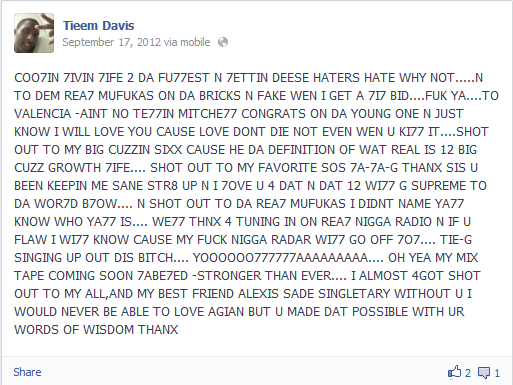 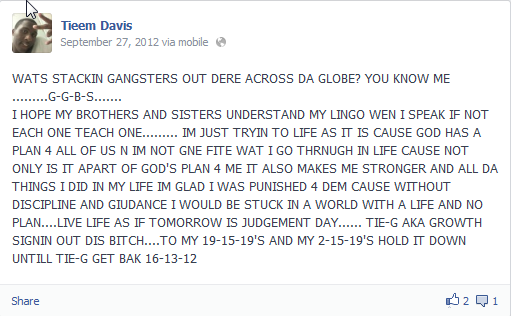 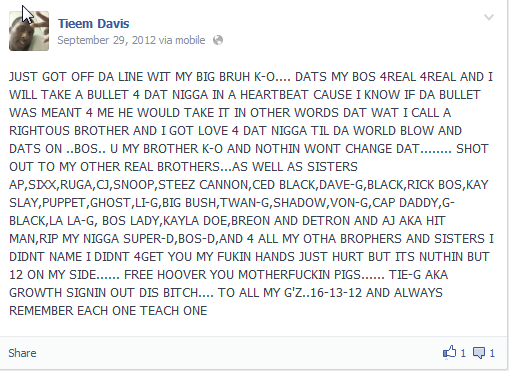 In this next post he issues veiled threats to the gang members who testified against him. EFF must have missed that violation of Facebook’s terms of service as they ran straight into whiney-bitch mode in their apparent zeal to protect and defend Henry. 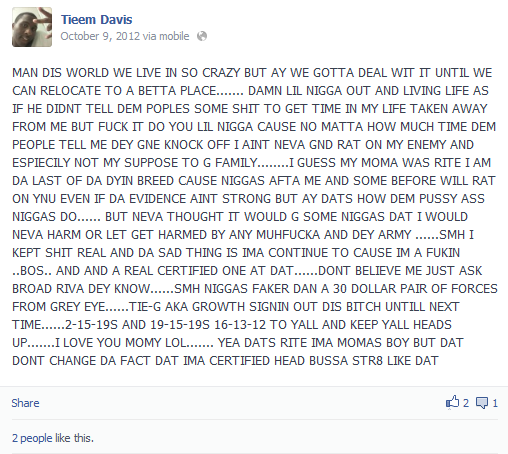 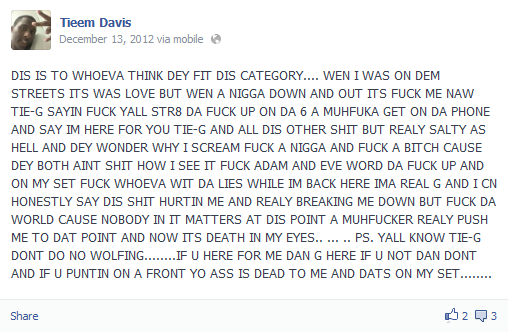 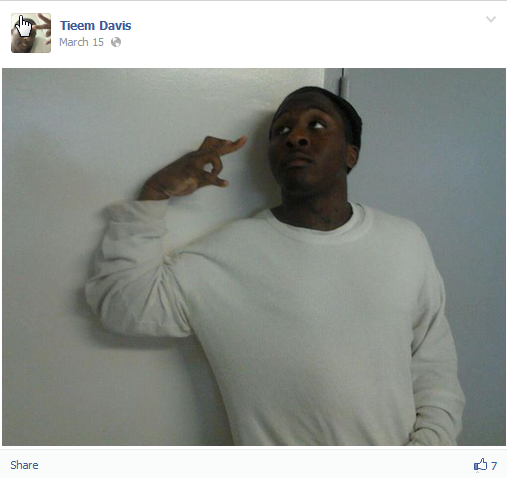 EFF claims SCDC can hold inmates longer as a result of them having a Facebook page. Not true. A sentence is a sentence and it is finite. We here at CTL have in the past pushed for new contraband laws which actually would result in additional sentences that could not be set to run concurrent with previous sentences, but our legislators here seem to be on the side of the law breaking inmates. It has something to do with them crowing about how quickly South Carolina’s prisons are being emptied while they claim to be saving you money.

Apparently the folks at EFF are much more concerned with an inmate’s loss of good time and how much it costs the state than they are with the fact that those inmates seem to have unfettered access to contraband cell phones. We notice they didn’t bother to mention the case of Captain Robert Johnson, the SCDC employee who was seriously wounded, nay, almost executed in his home as the result of a hit put out by an inmate with a cell phone behind the walls of Lee Correctional. No, they would rather bitch and moan that “Facebook has made it all too easy for prison to report inmates for having profiles”. Really? That’s the best you can do in justifying your ridiculous position on this issue?

All the good work the EFF has done in the past and they tarnish that with bullshit like this. Sad.